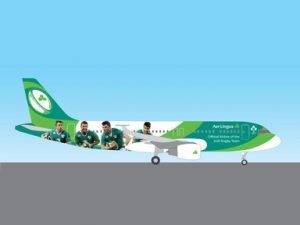 Aer Lingus and the IRFU have agreed a three-year partnership that will see the airline flying players, management and support staff around Europe as they take part in the RBS 6 Nations Championships and other international tournaments.

As the official airline of the Irish Rugby team, Aer Lingus will re-name one of its aircraft Green Spirit which will be transformed with IRFU and player branding. This aircraft will be unveiled in early May 2015 while a second plane will be branded in similar livery as the team sets off to the World Cup in England and Wales in September.

In addition, players from each of the four Irish provinces will be named Aer Lingus brand ambassadors and will take part in a safety demonstration video to be shown on board Aer Lingus transatlantic flights.

Celebratory send-offs and homecomings are also planned with the team it travels to and from the World Cup and Six Nations games.

“We have lots of exciting plans including the rebranding of aircraft in IRFU livery displaying our four ambassadors – this is a first for Aer Lingus and indeed for Irish aviation,” said  Mike Rutter, chief revenue officer at Aer Lingus.

“The partnership will help facilitate the travelling arrangements of all Irish teams to help maximise success at every level as well as delivering a new and exciting platform to further promote the Irish rugby brand,” said Padraig Power, IRFU commercial and marketing director.