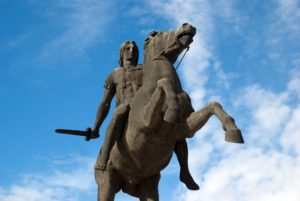 Statue of Alexander the Great at Thessaloniki city in Greece

Alexander the Great was one of history’s most celebrated conquerors. Born as heir to the Macedonian King, his great ambition led him to take on the high Persian Empire. At its height, Alexander’s empire stretched all the way from modern-day Italy clear to the Himalayas.

Alexander was born July 20, 356 BC in Pella, a city in the Ancient Greek Kingdom of Macedonia. As the son of Philip II, King of Macedon, Alexander was raised as a noble Macedonian youth. Learning to read, play the lyre, ride, fight, and hunt were high priorities for Alexander.

As he got older, his father had the famous Aristotle tutor his son. His father knew he could no longer effectively challenge the mind and body of his son. Aristotle educated Alexander and his companions in various disciplines such as medicine, philosophy, morality, religion, logic, and art. Many of his study companions would later become generals in his army.

When King Philip was assassinated, Alexander ascended to the throne at the young age of 20. After quelling small uprisings and rebellions after his father’s death, Alexander began his campaign against the Persian Empire.

Crossing into Asia with over 100,000 men, he began his war against Persia which lasted more than seven years. Alexander displayed tactical brilliance in the fight against the Persian army, remaining undefeated despite having fewer soldiers.

His successes took him to the very edge of India, to the banks of the Ganges River. His armies feared the might of the Indian empires and mutinied, which marked the end of his campaign to the East. He had intended to march further into India, but he was persuaded against it because his soldiers wanted to return to their families.

Alexander died unexpectedly after his return to Babylon. Because his death was sudden and he did not name a successor to his throne, his empire fell into chaos as generals fought to take control.

Today, Alexander the Great is still considered one of the most successful military leaders in history. His conquests shaped not just eastern and western culture but also the history of the world.

From a very young age, his parents instilled in Alexander a belief that it was his destiny to conquer the Persian Empire. This belief would stay with Alexander until his deathbed. At a few points in his life, Alexander even believed that he was the Son of Zeus and was to be worshiped. This demonstrates the depth of his self-belief.

Although it may seem to many that such extreme egoism could be harmful, it is essential for your self-worth and self-confidence to believe in yourself wholeheartedly. There has never been a leader in the history of the world who did not have a considerable amount of self-belief and confidence. This is how great leaders inspire the same level of self-confidence and self-worth in their teams, and it is how you can too.

Do you genuinely believe in your ability to succeed? If you can’t give an outright ‘yes,’ take a closer look at what beliefs are holding you back.

Alexander was a brilliant and cunning tactician in battle. He knew that the disorganized Persian army would not be able to withstand his phalanxes (a body of troops in tight military formation). So he used them to their best effect each time, breaking through enemy ranks and forcing the Persians to retreat.

A good leader understands the strengths and weaknesses of his team, and he puts them in positions where they are more likely to succeed.

You might liken it to being a chess player. You have a variety of resources at your disposal: people with differing skills and abilities. The key is always to learn how to position each person in a role that leverages their strengths.

Although Alexander conquered much of the known world during his time, his empire never survived him. His strength when he was alive became a weakness after his death.

After Alexander had passed away, no one had the charisma or leadership to rule such a vast empire.  Civil war soon broke out, and what Alexander built in one generation was destroyed in the next.

So find a way to position your team such that you become an unnecessary part of it. When your team is still able to perform at a high level even when you remove yourself from the equation, you have done your role as a leader.

Alexander was taken with the character Achilles in Homer’s epic tale, the Illiad in his growing up years. He decided to model himself after Achilles.

Alexander’s teacher was the well-known philosopher Aristotle, and he annotated the full version of The Illiad for Alexander, so he could better emulate Achilles. He cherished this gift from his mentor and would even sleep with it under his pillow.

He also received encouragement from his mother, Olympias. Rumors were that she consulted with the gods regarding her son and told him he was a direct descendant of Achilles and Hercules. This fueled the fire inside of Alexander.

After taming a wild horse at just 14-years old his father, Phillip II of Macedonia, was seeking to purchase, he proudly said, “My son, look thee out a kingdom equal and worthy of thyself, for Macedonia is too little for thee.”

Weaknesses of Alexander The Great

Famous and Well-Known Quotes from Alexander the Great

“There is nothing impossible to him who will try.”

“I had rather excel others in the knowledge of what is excellent, than in the extent of my power and dominion.”

“Remember upon the conduct of each depends on the fate of all.”

“How great are the dangers I face to win a good name in Athens.”

“A tomb now suffices him for whom the whole world was not sufficient.”

Random Facts of Alexander The Great

What is Alexander The Great Known For?

During his leadership run between 336 – 323 B.C., he was successful in uniting the Greek city-states and led the Corinthian League.

How did Alexander The Great die?

The exact causes are not known as it was not a custom in his day in age to list the cause of death as it is today. The most common belief is he died of typhoid fever (which, along with malaria, was a common form of death during that period in ancient Babylon). This was the theory proposed by the University of Maryland School of Medicine in 1998. Other theories included alcoholic liver disease, fever, and even strychnine poisoning.

King Darius – Commonly known as “Darius The Great” he was the fourth Persian King of Kings of the Achaemenid Empire.

Battle of Issus – Occurring in 333 B.C., this battle happened early in Alexander The Great’s invasion of Asia in which he was successful in defeating the Persian army led by King Darius III.

Battle of Gaugamela – See the following video summarizing the battle fought in 331 B.C.

This is why Alexander The Great was so great.

Who was the supreme commander of the allied forces?