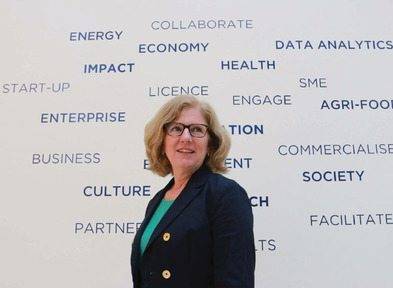 In the first article in Business & Leadership’s new ‘Future Business’ series published in association with Vodafone, Sorcha Corcoran explores the concept of business agility in reacting to changing customer needs.

The expression ‘if you snooze, you lose’ has to be resonating more and more with the business community as the world hurtles through a period of unprecedented change and consumers become ever more demanding.

And with rapid technological advancement and high consumer expectations has come an increased level of disruption.

“A disrupter is a person or firm that really changes the way business functions. It is not just about an incremental innovation or a novel idea. The most common way to be a disrupter is to change customer expectations – for example, it shouldn’t take 30 seconds for a bank card to clear or a minute for a computer to warm up. Once consumers have tried the innovation, they don’t want to go back to the previous way of doing things,” explains US-based business strategy consultant Dr Trish Gorman.

Probably the most high-profile example of a company to fall foul of disruption in recent years is Kodak, which went bankrupt in 2012 because it missed the boat when digital cameras came on stream, despite the fact that one of its engineers actually invented the technology in 1975. Kodak management’s inability to see digital photography as a disruptive technology led to the company’s downfall.

Every industry is subject to disruption. Think of Ryanair introducing the low-cost fare model to aviation, DVDs replacing videos and Apple’s various product launches from the iPhone to its recent announcement that it would move into mobile payments. The phrase ‘the greatest thing since sliced bread’ came from the disruption in 1928 involving a loaf of bread being pre-sliced with a machine and packaged for convenience.

In order to respond to disruption and a rapidly evolving market environment businesses have to be agile. US-based technology and market research company Forrester recently defined business agility as “the quality that allows an enterprise to embrace market and operational changes as a matter of routine”.

Gorman, who was a speaker at the InterTradeIreland 2014 All-Island Innovation Conference in University College Dublin on 1 October, breaks business agility down into four parts under the headings ‘strategic’, ‘resource’, ‘operational’ and ‘personal’ – which are in decreasing order of disruption.

“Strategic agility refers to the ability to see a new opportunity and go after it – say you’re operating a Disney theme park and you spot an opportunity in cruise ships. Resource agility is about attaching talent and money to an idea. It isn’t hard to put money against a good idea, what really separates agile businesses is the ability to take resources away from something that is no longer a good opportunity and move them elsewhere. Resources tend to be sticky once they’re invested,” she says.

“The operational element assumes you’re not going to change your business model, but within that you make the right decisions to become more efficient and effective. This could be about cross training your people, for example, the staff in hotel reception being trained to work in the back office or vice versa.

“Personal agility is concerned with the individual and being the right kind of leader for the right moment in your business’s story.”

As Gorman points out, modern-day business leaders sometimes have to tell their employees to break all the rules and forget everything they ever knew so the company can move in a new direction, while other times they have to steer the organisation to hold its course.

“It used to be we had this idea that there had to be different people doing different things within an organisation – the ‘boring’ accounting types looked after the finances while the entrepreneurial types whipped everyone up into a frenzy with new ideas. Increasingly, talented managers are being asked to do both, in other words be personally agile. One day they could be talking to investors, the next focused on sticking to a budget.”

Personally agile CEOs do exist – in Gorman’s view Paul Polman at Unilever and Paul Bulcke of Nestlé are good examples – but in most cases top managers focus on building an agile team rather than being completely agile themselves. This means recognising where their weaknesses lie and making sure there is someone on the team to carry the slack.

While research might show that larger organisations tend to be less agile, Gorman believes this doesn’t always hold true. “How close the decision-makers are to the problem is the real measure of a company’s agility. Multinational retailer Walmart is one example of a large organisation that can be fairly agile. Meanwhile, in some mid-sized companies, founders try to take too much control and there is not enough decentralisation.

“When it comes to agility, don’t let company size blind you to what you really need to look at. For instance, people tend to look at innovation as this ‘other thing’, but within companies you need to keep it going in order to be agile and stay dynamic.”

The need to be customer centric

Mary Cronin, co-founder of Irish training and consultancy organisation ThousandSeeds, adds to this view of Gorman’s: “Simply setting up a team dedicated to innovation is not being innovative – this is just another team where everybody thinks the same. When looking at building new companies as well as examining existing business models, we need to be careful going forward about how we actually innovate. There tends to be too much of a focus on products in relation to reinvention or diversification,” she says.

“We need to get people to think about really being customer centric as opposed to being organisation centric. To ask themselves ‘what are the unmet needs of our customers?’ and develop products based on that rather than selling products from the organisation out.

“When a company isn’t customer centric, products are developed with lots of features in them that customers never wanted – which is why so many fail.”

Cronin maintains that the key to being truly customer centric is knowledge transfer through observation and immersion.

“Customers don’t know what they don’t know. The companies that are going to survive are the ones which have the whole customer process set up around how they talk to them. It means when interviewing customers, they have to observe what they’re doing as opposed to what they tell them.”

To illustrate this point, she notes that when Henry Ford interviewed people about what they would like in terms of transport, they answered: “Faster horses of course”.

“In fact he created the motor car. He analysed what the driver wanted as opposed to designing the faster horse. Words were translated into insights through combining his knowledge and the customers’ knowledge. Companies that don’t constantly question themselves on how they create value for their customers will have a difficulty in surviving over the long term.”