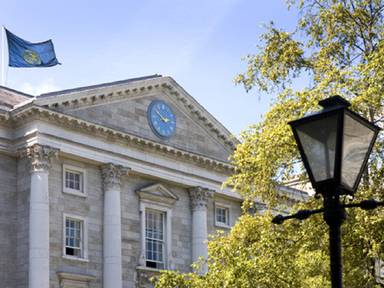 Trinity academics made fellows of Royal Academy of Engineering

The provost of Trinity College Dublin Dr Patrick Prendergast and the university’s professor of physics John Pethica have been named among 60 new fellows elected to the UK’s Royal Academy of Engineering.

With a first degree in engineering, Dr Prendergast was a pioneer of biomechanics. Before he became provost he was founding director of the Trinity Centre for Bioengineering and, from 2007, professor of bioengineering.

His areas of research include tools for computer simulation in mechanobiology, the science of how mechanical forces affect biological growth and remodelling, with particular reference in recent work to stem cell engineering. He has also studied the computational modelling of medical device performance.

Prof Pethica was founding director of Crann and the Naughton Institute and also holds the post of chief scientific advisor at the UK National Physical Laboratory. He moved to Dublin in 2001 from a professorship in materials science at the University of Oxford, where he remains a visiting professor.

His research has been in nanotechnology, in the fields of surfaces, thin films, atomic- and nano-scale structures. He devised the technique of nano-indentation for the mechanical characterisation of surfaces and thin films, which now has broad applications across surface coating and manufacturing industries. He presently works on mechanics of thin polymer films for lithography and device applications, and also on atomic scale manipulation at surfaces.

“We warmly welcome our new fellows to the Academy,” said Sir John Parker, president of the Royal Academy of Engineering. “With their expertise, knowledge and vision we will continue to strengthen our ambition of providing authoritative, impartial, and expert engineering advice to government and to develop the Academy’s growing impact and influence on a global stage.”