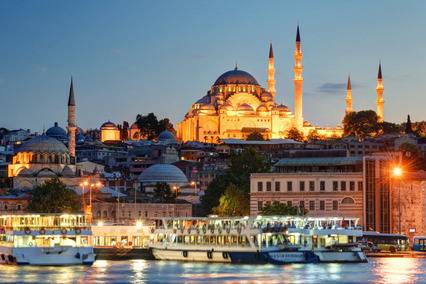 Over the past ten years, while all of Europe was struggling with the economic crisis, Turkey managed to keep growth rates to a level second only to China, and more and more Irish companies are becoming aware of the opportunities there, according to Jonathan Ryan, manager, Turkey, Enterprise Ireland.

Termed as an emerging market alongside countries such as South Africa, India, and Nigeria, Turkey has a well-developed infrastructure with continuous high levels of investment and has some well-established world-class industries such as cement, construction, steel, automotive and white goods along with its traditional textile sector.

It is now ranked as the world’s 16th largest economy based on GDP and is moving from being a labor-intensive, low value-added market to a technology-driven, export-led country.

“Turkey, similar to Ireland, recognizes that to compete on world markets, it must continuously innovate and its industries and service companies must move up the value chain,” said Ryan.

“Turks have demonstrated that they are competitive in their established industries but recognize that they need to develop more value-added innovative products. There is a clear and present window of opportunity here for Irish companies.

“Other countries are involved in working with the Turks to help them to achieve these goals, including China and Japan. Irish companies that have innovative technologies should look to Turkey as they will find enthusiastic partners to collaborate in developing both the Turkish market and other markets where Ireland has little track record.”

Turkish companies have indicated they are willing to invest in such ventures and the Turkish government is providing financial assistance for them to achieve these aims.

The most significant challenge regarding breaking into the market though is finding the right partners that have access to decision makers and with sufficient resources, notes Ryan.

“Turks are very polite, hospitable people and they do business with people they like. They may give a positive indication that they want to work in partnership but this may not be the case as they don’t want to be seen as being impolite and don’t want to offend.

“It, therefore, takes time to develop these relationships and companies need resources to manage this. Do not expect to fly into Turkey, appoint a distributor and walk away.”

Total Irish exports to Turkey in 2013 amounted to €430m, of which Enterprise Ireland [EI] clients accounted for €38m.

“EI has a database of 120 companies that are exporting to Turkey. PM Group and ESB International have recently opened offices in Ankara. EI’s objective is to work with Irish exporters to increase the level of engagement in Turkey by establishing an on-the-ground presence for the region and to work closely with their distributors and partners.”

Irish companies successfully doing business in Turkey come from a range of sectors, including specialized engineering and manufacturing as well as innovative software solutions.

Today, Turkey is the 17th most densely populated country in the world with a population of 73 million. The majority of the population in Turkey consists of young people, about 40pc of whom are under the age of 25, which will lead to major demographic growth.

The rapid urbanization of Turkey – and the huge growth of Istanbul in the past two decades – has defined the transformation of Turkish society and politics. There has been an intensive migration of people from rural areas, and it is now estimated that more than 70pc of the population now live in urban centers.

The three main metropolitan areas of Istanbul, Ankara, and Izmir have a per capita income far more than the rest of the country, with Istanbul citizens enjoying 55pc more than the average.

“By 2023, Turkey expects to be among the world’s top economies. Although the aims of the country are extremely ambitious, the recent statistics denote that they are achievable.

“The regional uncertainty of both Syria and Ukraine is a major issue in trying to predict further growth trends.”