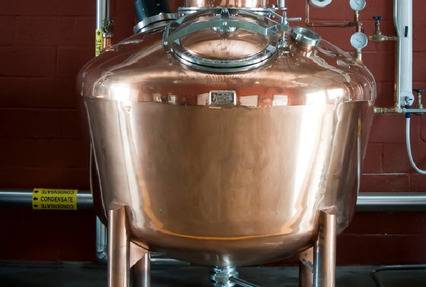 Global animal health and nutrition company Alltech is moving its whiskey business to Ireland, the birthplace of whiskey and of the president and founder of Alltech, Dr. Pearse Lyons.

The Vendome whiskey stills, used by Alltech’s Lexington Brewing Company and made in Louisville, Kentucky, were shipped over on 22 August.

The whiskey will be distilled in Carlow Brewing Company in Bagenalstown, Co Carlow. Separately, Alltech ale brand Kentucky Bourbon Barrel Ale will be featured in the Irish Craft Beer Festival taking place in the RDS on the 7– 9 September.

This year marks 221 years since the Whiskey Rebellion, a revolution of early Irish settlers in North America against George Washington’s tax on distilled spirits, which saw many of these early distillers taking their craft to Bourbon County, Virginia, where they created the first bourbon.

“A truly momentous event has happened as the first stills are shipped from Kentucky to Ireland, completing the cycle with this fantastic craft finally returning to its place of origin. This will set the stage for a new Irish whiskey with a Kentucky flair,” said Lyons.

Lyons has a number of historical connections to the distilling industry, with five generations of coopers in the family and a grandfather who was a master cooper. He also holds a master’s degree in brewing and distilling and a Ph.D. in yeast fermentation.

The new whiskey will not be Alltech’s first foray into Spirits. Alltech’s Town Branch Bourbon and Pearse Lyons Reserve Single Malt Whiskey were both recent gold medal winners at the 2012 World Spirit Awards, and the company is close to completing a $4.5m distillery project in downtown Lexington, Kentucky.

Alltech Ireland was opened in 1999 by An Taoiseach, Bertie Ahern TD and is home to its European Headquarters and Bioscience Centre in Co Meath, supporting 42 countries and 26 different languages.

Headquartered in Lexington, Kentucky, Alltech has offices and distributors in 128 countries; three bioscience centres; and 32 manufacturing facilities located strategically throughout the world.