Renewable energy generation and energy storage group Gaelectric said today that it has completed a €65m funding round for its onshore wind energy portfolio on the island of Ireland.

The portfolio is made up of 164 MW of generation capacity across 13 projects that the group plans to develop out by 2017. The company said the projects represent a total investment of around €250m.

Gaelectric said it has also concluded a framework agreement with German turbine manufacturer Enercon which will see the latter’s technology deployed on all the Gaelectric sites covered by the current funding round.

The funding is led by the Swedish group, Proventus Capital Partners, which specializes in providing development capital through private corporate loans to mid-sized companies for growth. Gaelectric was assisted with the transaction by McCann Fitzgerald and by RBC Capital Markets.

This funding has been complemented by a senior debt package provided by Nord/LB. This debt financing has been used to finance the construction of the 13.8 MW wind energy project currently being energized by Gaelectric at Carn Hill, Co Antrim.

“In our discussions with funders and investors we have been able to provide clear visibility of a portfolio of projects which have been substantially de-risked and which will be commissioned by 2017,” said Gaelectric group finance director Barry Gavin.

“We now have 120 MW of wind energy projects with full planning approval and grid connection offers. 18 MW of this portfolio will be generating renewable power by Q1, 2013. Our onshore portfolio in Ireland will create sufficient generation capacity to power the energy needs of 85,000 homes and displace 262,000 tonnes of CO2 per annum.” 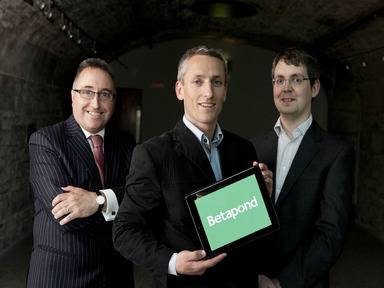 Betapond has raised €2m in a new funding round led by the Ulster Bank Diageo Venture Fund, managed by Investec Ventures. Delta Partners and Irrus Investments also participated in the round.

Betapond is a social technology firm and established provider of Facebook technology solutions for global brands in retail, consumer goods, and tourism. It is headquartered in Waterford, with offices in London, Dublin and San Jose.

The company plans to use the funds to accelerate the development of its social commerce offering to retailers, powering product recommendations from other Facebook users the consumer trusts.

“We are thrilled to secure this new round of investment led by the Ulster Bank Diageo Venture Fund and to be working with Investec Ventures, whilst deepening our relationship with Delta Partners and Irrus Investments,” said Declan Kennedy, CEO, and co-founder.

“Betapond delivers innovative social technology solutions to a great portfolio of global brands. This funding enables the company to accelerate its development and go-to-market plan to be a global leader in social commerce solutions.”

Leo Hamill, partner, Investec Ventures added: “Betapond combines many of the key attributes we look for when investing in business including a highly professional and capable management team, a proven business model and a clear strategy to grow the business both domestically and internationally.”

Movidius raises US$40m and will create 100 jobs in Ireland

Movidius raises US$40m and will create 100 jobs in Ireland

Irish vision processor company Movidius has raised US$40m in funding, which will lead to the creation of up to 100 jobs in Ireland.

This represents is one of the largest venture capital investments ever in Ireland for a technology company and the largest globally for a fabless semiconductor company in the past two years.

Movidius currently employs 15 people in Dublin out of a total of 70, the rest working in its operations in Romania and Silicon Valley.

It will use the financing to further drive software and hardware product innovation in visual sensing for the next wave of emerging applications, including virtual reality headsets, drones, home automation, and wearables.

According to the company, its technology will transform how devices and users interact with the world around them through “intelligent, vision-based technology”.

“This significant investment of capital provides us with the resources to expand strategically, innovate constantly and extend our market leadership.”

Dublin-based sports nutrition start-up Elivar has raised €700,000 from investors, which will allow it to create 10 new jobs by the end of 2015.

The positions will be in the areas of food science, production, ecommerce, marketing and finance.

Founded in Dublin by Donal Hanrahan and Len Dunne in 2012, Elivar develops a range of sports nutrition products, specifically formulated and tailored for the over 35 age group and currently employs four people.

Both Hanrahan and Dunne trained and rowed at an international level in their twenties and now, in their forties, are active in endurance sports.

They found that while there is an abundance of sports nutrition products that support endurance and recovery for young and elite athletes, there was nothing tailored for the needs of their specific age group, despite having different nutritional needs.

Elivar’s core products have been developed with nutritionists and food scientists to deliver a full nutrition system to athletes who are over 35.

While 90pc of Elivar’s sales come from the UK and Ireland, it also exports to Germany, France, Belgium, Italy, and the Netherlands and it is looking to expand its sales channels across Europe in the coming year.

“While our initial funding was required to bring Elivar to market, the HBAN food syndicate investment also provides us with the active support of some of Ireland’s leading food entrepreneurs,” said Hanrahan.

“In the long term, it is their combined experience which will help us develop Elivar to its fullest potential, as a successful Irish food company operating in a global market place.”