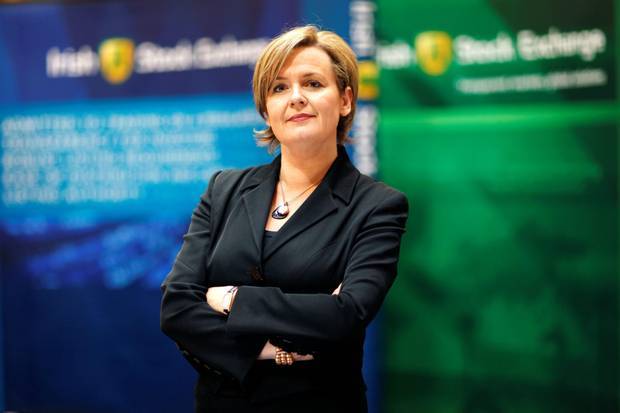 Deirdre Somers is CEO of the Irish Stock Exchange.

Cork-born Somers is the first female CEO of the 300-year-old ISE.

Deirdre Somers, chief executive of the Irish Stock Exchange (ISE), is very much a woman in a man’s world. Sitting in her office towards the top of the venerable old building on Anglesea Street, it is immediately obvious she would stand out in this normally sober world. Dressed in a bright cerise suit with killer heels, Somers is as elegant and poised as her surroundings.

Her office is decorated with prints sourced from the Print Gallery in neighbouring Temple Bar, with pictures of her two young children having pride of place on the shelf.

Somers, no relation to Michael of the National Treasury Management Agency who is also on her board, is obviously charismatic and surprisingly easy-going. Her new communications director recently asked how she can be so relaxed as CEO of an institution with a 300-year-old tradition in a 200-year-old building and 100 employees. “I wasn’t nervous before that, but it got me thinking,” she laughs.

Cork born and bred, Somers has little trace of an accent. “I was the baby of the family,” she explains. “My mother was from Kerry and my father from Kilkenny, but I was the only one born in Cork, so they knocked it out of me.” She does, however, do a very good impression of one.

Somers went to St Angela’s College in Cork and found it a formative experience. “It was an amazing school and one of the few back then to offer girls honours maths, physics and German.” She performed well in all three and went on to pursue a BComm at UCC where she did well, particularly in mathematical subjects, but also had great fun.
“It’s so important to have fun in college,” Somers laughs. “I see kids today and they have interned at accountancy or legal firms during their holidays. I just think it’s a shame — I would much prefer to see a bit of colour, some waiting on tables or other casual work. They will have the rest of their lives to work as accountants, but you can’t beat the skills you learn from doing something different that you will never do again.”

Somers graduated in the dark days of the late Eighties, but immediately had two job offers. She was given the choice of staying in Cork and working for KPMG or moving to its tax department in Dublin straight away. She jumped at the Dublin option.

“I was so glad that I avoided auditing,” Somers says. “My brother had warned me of the horrors, but I still had to do a little.”

She remembers with a shudder one packaging firm client, with aspirations to compete with Smurfit, where she had to trundle out to the Naas Road every day to count bales of paper. “I was never so relieved to get back to tax.”
By the time she qualified a couple of years later, Somers knew she wanted to break into corporate finance. Her nerdy side relished the deals and the complexity, she admits.

“I loved the technical stuff, the innovation and cleverness, the intellectual side of deal making.”
Somers struck it lucky when KPMG decide to set up a group to see if it could work on the new International Financial Services Centre. Her partner at the time warned her it might not come to anything, but she jumped right in.

“It was being headed up by Paul McGovern who was a god in KPMG at the time. We were offering a turnkey package for financial companies coming to the IFSC, everything from the structure to personnel and even premises. But I worked with the brightest and most innovative professionals in Dublin and it is what made me the professional I am today.”

However, the demands were huge: 16-hour days were commonplace and it was immensely pressured. Somers stayed for eight years, being promoted to senior manager along the way, and then went off on secondment to the ISE for a couple of months.

“After a month, my husband, brothers, parents and basically everyone was telling me I was once again the person I used to be. I hadn’t realised it, but the huge stress of my job had changed me. I was offered a job as head of policy and accepted.”

The difference was amazing. “I now had the ability to set the timetable as we were at the end of a working chain rather than having it set for me. But I still think my time at KPMG was extremely valuable and I would recommend to everyone to stay at practice long enough to become a senior manager. It really equips you for anything you may want to do in business afterwards.”

Somers’ career soon took off in the ISE where she became director of lending, before eventually landing the CEO’s job almost a year ago.

“I love it,” she enthuses. “But it is very different. It is all about what you do not do. It is also about ensuring that things are done, and you do not realise how hard that is until you have to do it.”

The life of a CEO can also be lonely, with no limits and no one to validate your work, she concedes. “Often, the best validation you get from a board is silence.” Nonetheless, Somers relishes the challenge.

Deciding to go for the job was the hardest part and one of the toughest decisions she has ever made.

“There are huge personal impacts for me and my family. Whether you like it or not, it is different when you’re a woman as your husband will nearly always work.”

Her own husband is an investment banker, but was totally supportive of her decision. The two travel extensively with their children and are heading off to North America this summer, having already been to South America, South Africa, Asia and the Middle East, as well as all over Europe. “It’s one of our big luxuries.”

The ISE itself is facing a challenging future. She has recently put in place a new four-year plan that involves looking outward to a much greater extent.

The exchange is already very involved in international funds and bonds, but the challenge is to integrate and join this up with the domestic market to provide a far deeper service.

So how would Somers define success? “The only thing that can deliver control is a success. We do not want to be mopped up by some globalised stock exchange unless we choose to be.”

Somehow, with Somers at the helm, this seems pretty unlikely.