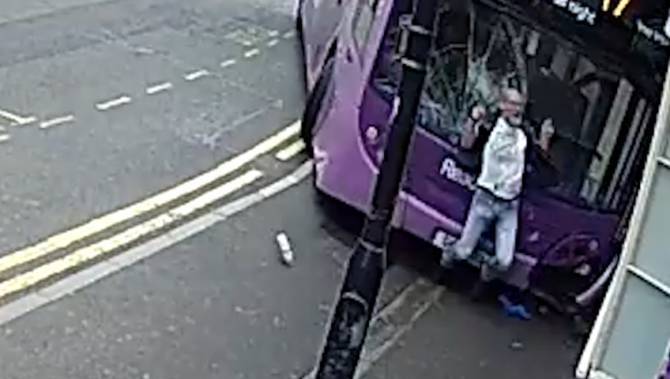 When The Bus Catches You

It was a quiet Saturday morning in the heart of Redding, just east of Edinburgh in the UK, when Simon Smith, was harshly greeted by the city’s bus. This “greeting” can only be described as a spectacular accident with an incredible ending.

Upon review of the CCTV footage from The Purple Turtle, a well-known local bar, one would think Smith would be seriously injured, or worse, killed from the impact. However, as the footage shows, Smith stood up on his own and walked into the local bar to have a pint.

To which bar patrons began saying “Keep Calm and Have a Pint.”

Smith, 53, was crossing Gun Street when he said he heard a loud noise directly behind him. This caused him to look back and embrace the impact, which shattered the bus’ windshield from his head being struck. 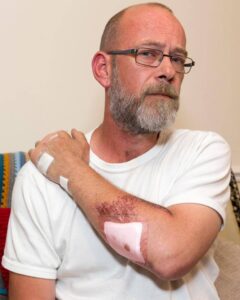 Simon is nursing his injuries following a horrific collision with a bus.

Lucky To Be Alive

Smith says he is lucky to be alive, but despite the footage, he suffered serious injuries and is in a lot of pain. During an interview with The Telegraph, Mr. Smith’s wife became agitated, saying that her husband should not be there interviewing because of his severe pain. She wanted to focus on his recovery.

It is not known if Smith has secured the representation of an attorney in the matter. It is also unknown if he has been in contact with Annuity Fact Check to assist in paying for his medical expenses and time off work while the legality of the accident is taken care of.

According to Jeffrey Nadrich, from the law firm of Nadrich & Cohen, there are steps Smith should have taken to protect not only himself but also his legal rights.

Smith was fortunate to have been thrown out of harm’s way as if the bus has run over him; he may not have had the ability to stand on his own and almost leisurely stroll into the pub.

Thames Valley Police said there had been no arrests made as of today. However, they are still investigating the crash.

A spokesperson for Redding Buses called it an “awful incident,” and they are conducting their own investigation as well. In the meantime, the driver who was involved in the accident has been “taken off the road” pending the investigation.

Stuart McNaught, the manager at The Purple Turtle bar, said he initially thought Smith was not involved in the accident because he just casually walked in. However, once the shock of the accident wore off, Smith complained heavily of pain and was transferred to a nearby hospital.

Cheikh Senghor, 40, was the driver of the bus which struck Smith, who later stated he hit the gas pedal instead of the brake pedal when rounding the corner and lost control of the bus temporarily. He was cited at given an eight-month suspended jail sentence for dangerous driving. Senghor said to Simon, “I am terribly sorry, it is the last thing I wanted to happen.” Simon publicly forgave Senghor saying that he knew Senghor didn’t set out to hit him. Senghor wished Smith a speedy recovery and a return to normal life as quickly as possible.

Warning: Some people may find this footage distressing.