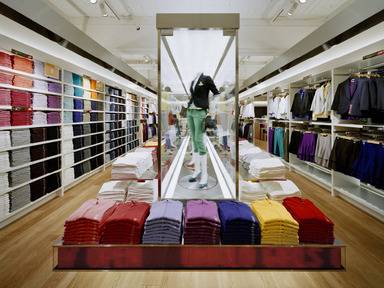 The first Uniqlo store opened in Japan in 1984, and it has since emerged as an international clothing brand with more ambitious plans for the future, writes Sorcha Corcoran.

The emergence of international clothing brand name Uniqlo was the result of a typo when Japanese company Fast Retailing (FR) was launching the brand in China around 2000. Standing for Unique Clothing Warehouse, it was meant to be Uni-clo, but when the management team saw the misspelling they liked it and decided to go with the change, according to Daisuke Hase, PR manager, global marketing and communication department, FR.

The first Uniqlo store, opened in 1984 in Japan, was previously a retail outlet for a company that sold men’s suits owned by Ogori Shoji. His son Tadashi Yanai, chief executive of FR, decided to launch the Uniqlo brand because he found casual clothes to have more business potential, says Hase.

“People buy suits about once or twice a year, which represents low turnover, while they buy casual clothes every month or so.”

There was a surge in Uniqlo sales nationwide in 1998, thanks to a fleece apparel campaign. After this, revenues started to fall, so FR reworked its strategy and engineered a boost in performance of the Uniqlo brand by expanding its line of women’s wear.

“Initially Uniqlo was a retailer, purchasing products from others and selling low-priced items of medium to low quality. As time passed, we were not happy with the quality so decided to create products ourselves. This was the turning point for the brand,” Hase explains.

“Now we create our products and sell them ourselves. From here we came up with the brand values of ‘Made for All’ and the group corporate philosophy, the ‘FR way’.”

The brand aims to transcend all categories and social groups. Its clothes are literally ‘made for all’, going beyond age, gender, occupation, ethnicity and all the other ways people can be defined.

As stated in the company philosophy, the essence of the FR way is to create “truly great clothing with new and unique value, and to enable people all over the world to experience the joy, happiness and satisfaction of wearing such great clothes”. The second prong is to “enrich people’s lives through our unique corporate activities, and to seek to grow and develop our company in unity with society”.

“We differ from other so-called ‘fast fashion’ companies through our philosophy. We see ourselves as completely different from other clothing manufacturers – we sell clothes not like fashion items, but products essential to an individual’s lifestyle,” says Hase.

Having emerged as a trend in the late 1990s, ‘fast fashion’ is a term used to describe clothing collections that are based on the most recent fashion trends, and designed and manufactured quickly and cheaply to allow the mainstream consumer take advantage of current clothing styles at a lower price. Fast fashion is generally associated with brands like H&M, Zara and Topshop.

Uniqlo’s expansion into international markets began in 1991. It began by launching stores in the UK and subsequently started ventures in China, Hong Kong, South Korea, the US, France, Singapore and Russia. As of the end of February 2011, Uniqlo had 824 stores in Japan and 150 stores in other markets overseas.

Hase says brand awareness varies greatly from country to country. “In Japan, it is probably at its highest – people may feel familiar with the brand because it has been there for more than 20 years. It is low in other countries as we have a limited number of stores.

“However, the image of the brand outside the domestic market is more that of a ‘cool brand from Japan’, associated with pop culture T-shirts using Manga art, for example. This has been driven by web marketing programmes.

“Our vision for 2020 is [for FR] to be the No 1 clothing company in the world, with stores all over the world. We believe we will have 5trn yen [circa €43bn] in sales and 1trn yen [c €8.5bn] in profits – that’s equivalent to the size of Gap, Indetex [Zara], H&M and Fast Retailing combined today. That’s how aggressive we are and we believe we will centre Uniqlo as the key brand.”

In 2010, FR reported net sales of over 800bn yen [c €6.8bn]. Uniqlo is the company’s mainstay brand, but other brands contribute to this sales figure.

“On a regional basis, we believe in sales growth from Japan, the China mainland, the rest of Asia, Europe and the US. We believe we will have 1trn yen in sales from these five markets to achieve total sales of 5trn yen in 2020. We do not have a clear plan for Ireland, but one day would love to make connections there.”

In 2000, Fast Retailing moved its headquarters from Yamaguchi Prefecture to Tokyo to promote merchandising and marketing, and it also entered the online selling arena.

“Online is a very important part of our business. In Japan, about 5pc of our business comes to us this way. But for countries where the number of stores is low and the landmass is big (for example, China) we see a major growth opportunity. We plan to expand online stores, hopefully in all the markets we operate in,” notes Hase.

Indeed he says that most of the important marketing milestones for Uniqlo have been web-related in recent years. He cites Uniqlock, the web ad campaign that picked up a range of awards including Cyber and Titanium Lions at Cannes, Uniqlo Calendar and Uniqlooks, a recently launched programme leveraging Facebook and SMS.

“The philosophy behind all of our communication now stems from what we learned from Uniqlock,” Hase explains.

“We created a scene which was a mixture of a clock and four Japanese girls wearing Uniqlo clothes and dancing to music. People were looking for tricks to make their blogs more interesting; they wanted to put a stamp on their blog. The Uniqlock widget allowed them to do this. Every time someone visited the blog with the widget they would see what time it was in their own country and see the girls dancing.

“At the time [2005–2007] this was seen as innovative as nobody knew how to use blog parts as a marketing tool. In the end Uniqlock won awards at Cannes in 2008. We learned from this that the most important thing about communication was to be receptive to people.

“Customers are seeking information so they search on the web, then they want to tell their friends about what they find. Creating buzz and brand awareness through customers’ word of mouth is critical work for us.”

Due to store numbers, Uniqlo only really does TV ads in Japan, and sometimes in South Korea and China. “It depends on the campaign and the investment we want to make. The objective with TV advertising is the same as with online campaigns – to be receptive. When someone is watching a TV programme they are not actually willing to be communicated with and may walk away when commercial breaks come on. So we try to make the TV ads as interesting as possible, presenting our products in a way consumers will enjoy.”

Social media is very important as part of Uniqlo’s overall marketing strategy. For example, Hase notes that the brand now has 600,000 Facebook fans worldwide, 100,000 of whom are in Japan. Each country has its own Facebook page.

Uniqlooks was launched in February this year. The idea is that the Uniqlo Facebook community can share images of how they wear the clothes or use the brand in a fashionable way to decorate themselves, says Hase.

“The Looks campaign came from our learning about the power of content and people-to-people communication from Twitter activity. It allows us to show real people in real time wearing our clothes. It gives people the choice to create a buzz about our brand.”