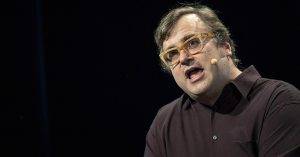 According to Hoffman, the one thing you don’t learn as a student is to leave the beaten path. How do you be the entrepreneur of your own life? This opening to his interview is quite puzzling, especially with Hoffman’s Oxford education. Surely he is well aware the writings of beloved essayist Ralf Waldo Emerson who penned the famous Self Reliance essay. Emerson clearly admonishes the reader to go off the beaten path. Listen to their heart. Owe a debt to no man and become self-reliant so they can be free of their own thought and convictions. He mentioned questioning himself during his younger years of “How can I get into Stanford?” or “How can I get into Oxford?”

Hoffman then mentions questioning himself during his younger years of “How can I get into Stanford?” or “How can I get into Oxford?” And it was this questioning of himself which led him to a new path. One that made him realize Lifetime relationships provide the opportunity. People that you meet in school and the people that you meet at work, provide

“People that you meet in school and the people that you meet at work, provide the opportunity for what you learn, for how you develop industries, and how you progress in your career,” counseled Hoffman. Looking back on his career he stated that if he had understood this simple principle, he would have become an entrepreneur earlier.”

I am quite certain the writings of Emerson were assigned during his education years, as they are for most high school and college students. Hoffman clearly either ignored the assignments, or did as little as possible to pass the assignments. While this is pure speculation, it is hard to understand how a person with the education from Oxford was not influenced by the writings of Emerson and just gained the insights during their years in business.