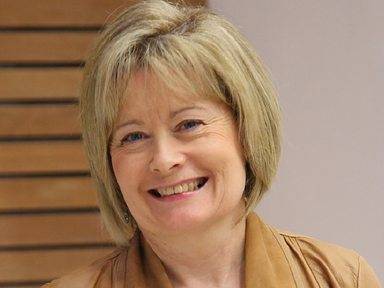 Ann Horan, chief executive of the DCU Ryan Academy, talks about her own career, a growing interest in female entrepreneurs and some of the traits women bring to leadership roles.

Could you tell us a bit about your career path and what your role involves now?

My career began in the Central Bank in the mid-70s, not that long after the ending of the marriage bar.  Right from the start, I loved the bank.  I found the work interesting and progressed through the various roles and levels.  I soon started to study, attracted initially by the promise of money for passing the exams and then I discovered my love of learning.   Over a period of 10 years or so, I did my banking certificate, trustee exams, the ACCA and then a master’s in finance at DCU.  I also got married and had my two children – it was a busy and productive time.

In the late 80s, I was offered a job in the Investment Bank of Ireland.  I decided that it was now or never if I was ever going to move on, so I took the position.  IBI was different.  It was quite a culture shock and for the first time in my career I realised that it mattered that I was a woman.  I stayed three years, learned a huge amount and transitioned successfully from the public to the private sector.

Since leaving banking, I’ve had a number of interesting roles, including setting up a family office for one of Ireland’s wealthier families and a contract in South Africa.  In January 2009, I took on my current role as chief executive of the DCU Ryan Academy.  The academy is a joint venture between Dublin City University and the family of the late Tony Ryan, founder of Ryanair.  Our aim is to be a leading supporter of entrepreneurs and innovation and we run a number of successful programmes to educate, develop and accelerate entrepreneurial ventures.

Do you think being a woman made it more of a challenge to get to your where you are and, if so, how?

That’s an interesting question.  I can honestly say that I was never discriminated against when it came to promotions or opportunities.  The challenge was more in relation to the subtleties and social interactions.  It is difficult to regularly find yourself as the only woman in the room and while the conversation at the board table is always professional, the chat over coffee was invariably about ‘the match last night’ and this can feel excluding.

How has the environment changed for women in business over the last five or 10 years?

In the area in which I currently work, there is a marked and growing interest in the subject of female entrepreneurs.   We see an increasing realisation that women have underperformed in this area to date and that with so many bright young women in our education system, it is imperative that we encourage more young and older women to become the entrepreneurs and job creators of the future.  State agencies and corporates are starting to introduce specific programmes for women.  It is interesting to note that women are responding to these initiatives in a way that they didn’t to the mainstream offerings.

Do you believe it’s important to have a more diverse range of skills, opinions and backgrounds in business and leadership positions and, if so, why?

Absolutely.  You only have to look at the problems of the last few years to see what happens when you have a lack of diversity and ‘group think’ in the boardroom.

How do you define great leadership?

For me, leadership is best defined by the quality of your followers.  Are people motivated by you and willing to follow your lead and work together towards achieving a common vision?  The leaders I admire most are those who lead by example and are genuine, honest and fair.

What particular traits do you think women in general bring to leadership roles?

In general, women like to collaborate rather than compete and to achieve their aims through understanding and negotiation.  I read an interesting quote recently by Susan Brownmiller, who noted that: “Women as a class have never subjugated another group; we have never marched off to wars of conquest in the name of the fatherhood.  We have never been involved in a decision to annex the territory of a neighbouring country, or to fight for foreign markets on distant shores.  These are the games that men play, not us.” [i]  This was written in 1970, before Mrs Thatcher and the Falklands War but she is possibly the exception that proves the rule!

How do you feel about gender quotas?

When I was younger, I subscribed to the view that women should do it on merit and not rely on interventions and quotas.  Then I realised that life is just too short and that we will never achieve real change in our lifetimes without interventions.  So now I am a full supporter of quotas.

What do you believe are the main obstacles to women getting into leadership roles and how do you think these can be overcome?

I will answer this from the perspective of female entrepreneurs and the obstacles that they face in establishing high growth businesses.   These include access to finance and networks and a lack of confidence, ambition and good role models.   Most venture capitalists, angel investors and bank managers are men.  When a woman stands up in front of them to ask for money, there is too often a gap in terms of their understanding of what she is about and her understanding of their expectations.  Ambition is a particularly interesting problem.  The GEM report (Global Entrepreneurship Monitor) for 2011, reports that in Ireland men are 2.5 times more likely than women to set up a business and nine times more likely than a woman to have ambitions at the start-up stage to create a business of scale.  The latter statistic is the one that worries and indicates a lack of ambition that needs to be addressed by specific interventions.

Do you feel that being a positive role model to other women and to girls is important?

Definitely.  I don’t understand women who achieve career success and then try to ‘pull up the ladder behind them’.  Thankfully, I believe that this phenomenon is becoming quite rare and most successful women in my experience are keen to encourage younger women and to ease their career paths where possible.

Are you actively doing anything to encourage more women into leadership positions? If so, could you give me details?

At the moment, my main interest is to support women entrepreneurs.  At the Ryan Academy, we have just established our High Fliers programme to address some of the issues and obstacles for women.  We recently launched a series of master classes with a leading performance coach, Struan Robertson.  Now we are planning a development programme to address specific issues and are currently fundraising for an accelerator programme for female led start-ups.  I am particularly excited about the accelerator initiative which will allow us to combine our three years experience of managing Propeller (a venture accelerator for ICT start-ups) with my own wide network of successful women who would welcome the opportunity to get involved with mentoring, advising and potentially investing in female led start-ups.

What would your main tips and advice for success be?

I could write all day about the lessons that I have learned throughout my career.  I guess my key pieces of advice would be to work hard, create your own luck and stay true to yourself and your values.  My number one business tip would be to network.  Find a way that suits your style and expand your networks constantly.

Who or what has influenced you most?