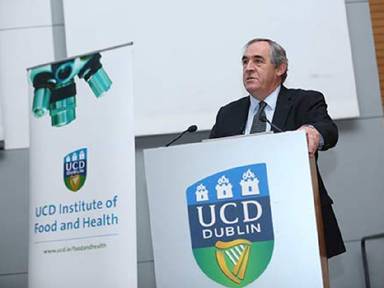 Michael Gibney, UCD Professor of Food and Health, has been appointed chairman of the Food Safety Authority (FSAI).

The FSAI also appointed Raymond O’Rourke, a qualified barrister and a food regulatory and consumer affairs lawyer, and reappointed Prof Charles Daly, emeritus professor of food science and technology at University College, Cork, to its board.

“Prof Gibney will be a tremendous asset to our board’s cumulative deliberations,” said Prof Alan Reilly, chief executive of the FSAI. “His appointment reaffirms our science-based ethos which underpins all the decisions, policies and actions of our organisation.

“He has an impeccable global reputation for research on food and nutrition and has served on a number of high-level advisory committees in this area, both nationally and at EU level.”

A graduate of UCD, with a master’s in agricultural chemistry, Prof Gibney completed a PhD in Sydney University.  His previous roles include professor of nutrition and subsequently dean of research with Trinity College, Dublin.  After 23 years with Trinity, he took up the post of director of the UCD Institute of Food and Health in 2006.

Prof Gibney was a board member of the FSAI from 1999 to 2009. He has also served on several EU and UN committees on nutrition and health including the EU Scientific Committee for Food and the EU Scientific Steering Committee, where he chaired its BSE Working Group.  In 2010, he was appointed to the Scientific Advisory Board of the European Joint Programme Initiative on Food and Health Research.

He is former president of the Nutrition Society and has published more than 250 peer reviewed scientific papers in Public Health Nutrition and Molecular Nutrition. He is the principal investigator on several national and EU projects.