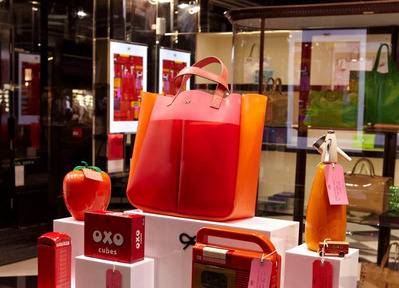 Hindmarch, whose bags can retail at up to £2,895, became the award’s 40th winner, following in the footsteps of Dame Anita Roddick of The Body Shop fame and Linda Bennett, founder of LK Bennett. She saw off competition from City heavyweight Helena Morrissey, chief executive of Newton Investment Management.

Organisers of the event say the award is the first international award created specifically to recognise the contribution that women have made to business life and is now regarded as the “Oscar” for female entrepreneurs and business leaders – the Irish version of the awards has been running for over thirty years and last year’s winner was Colette Twomey of Clonakility Blackpudding.

In an interview with The Guardian, Hindmarch cited Margaret Thatcher as her inspiration for getting started back in the Eighties. “There was quite a feeding frenzy of start-ups,” she told the newspaper. “And it’s very catching. That’s what’s exciting now. If you get one, you get three; if you get three, you get nine.”

Hindmarch also counts celebrities including Claudia Schiffer, Kate Moss, Angelina Jolie and The Duchess of Cambridge among her fans.

The 43-year old designer displayed an entrepreneurial spirit from a young age, producing handbags during her gap year in Italy. She has since grown her business from one London shops to 57 outlets, with stores in New York and Tokyo.

She was honoured with an MBE in 2009 and last year was made a UK Trade Ambassador by David Cameron.

This year she also pledged her support for embryo entrepreneurs by partnering the School for Creative Start-ups founded by Dragon’s Den investor Doug Richard.

Dubbed an ‘MBA for creatives’ the school will run workshops and year-long courses across fashion, design, performing arts and digital industries.