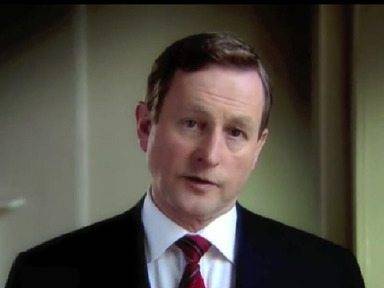 “We are glad you are here for this crucially important event,” he said. “We want to hear your ideas on how together we can grow Ireland.”

Kenny said that in the history of Ireland, there has “never been such an unprecedented challenge nor such an extraordinary opportunity”.

He talked about some of the priorities of the Government in its mandate to “face up to and tackle the country’s problems and to get Ireland working again”.

These include restoring Ireland’s place as a respected and influential member of the international community; tackling the crisis in the banks so they will “become a contributor to the economy, rather than a drain on it”; addressing the fiscal crisis through reform and ensuring value for money in public spending; and putting the protection and creation of jobs at the heart of our economic plan.

In the very short time since we took office, there are clear signs that our plan is working,” he said. “The spread between Irish and German bond yields has more than halved since July.

“The budgetary situation has stabilised with tax revenues slightly ahead of target in the first nine months of the year, and spending staying within budgets.

“GDP growth rates in the second quarter of this year were the second highest of the 27 EU countries, and the Central Bank has just revised upwards its growth forecast for this year.

“The funding situation for Irish banks has stabilised and overseas deposits are returning to Irish banks,” he said.

“These are positive developments but while we have much more to do, international commentary in business, in economics and politics reflect an Ireland of increasing confidence. “

Kenny said his vision is to make Ireland the best small country in the world in which to do business by 2016.  “To make my country synonymous with genius, with entrepreneurship, with vision and innovation. I intend to make that vision a reality.

And he spoke about the Irish diaspora of 70 million people who this weekend will “connect together in a way never been possible before”.

He concluded by saying he believes a new age for Ireland lies ahead. “The potential of this new age is there to be grasped. The people who grasp it freely will stand out from the crowd, whether that be based on the traditional strengths of Ireland or the realisation of what we can achieve in data analytics, cloud computing, the nano world and so on.

“It is the marriage of the old and the new that will differentiate the average from the brilliant, the stellar from the mundane.

“You will be asked what it is that you want to do and you will be challenged to work with us on particular ideas. This is what you expect and that’s what you will get.”