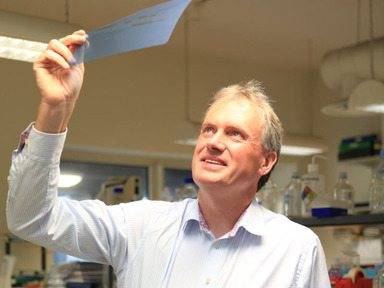 One of the world’s foremost authorities in the  innate immune system, Prof Luke O’Neill has seen a remarkable transformation in Ireland’s life sciences sector over the past 20 years, as he tells Ann O’Dea.

From relatively humble beginnings, the life sciences sector today accounts for some 50pc of all exports from Ireland, a figure that has been growing by some 6pc every year since 2000. Life sciences employs in excess of 52,000 people here.

One of Ireland’s leading thinkers, Luke O’Neill, professor of biochemistry at Trinity College Dublin, has participated in, and watched, the transformation in the sector since the late Nineties. O’Neill has won numerous awards for his pioneering work on the molecular understanding of innate immunity and inflammatory diseases, and has gained worldwide recognition for his contribution to this field of research. He has received, amongst many others, the Dan Perry Award for Immunology from McGill University, and has been named a Distinguished Lecturer at Oxford University.

O’Neill’s easygoing and approachable manner belies a sharp intellect and remarkable scientific career, but as we speak it is clear that this ability to communicate with ease and ‘translate’ complex subjects into plain English may well be one of the keys to his remarkable success in his field.

He believes the whole life sciences sector in Ireland has transformed radically in the 20 years since he took up his post in Trinity in 1993, moving back to Ireland from Cambridge at just 26 years old, and he clearly has great pride in having been part of the revolution.

“We’ve made huge progress,” he says. “I was appointed here in 1993 when Ireland was a different country. When I told my boss in Cambridge I was moving here, he said: ‘Are you mad? That’s a backwater! There’s nothing going on there’. And it really was seen that way at the time. There were no areas of science really that were in any way known outside of Ireland, with the exception of pockets like genetics, which was strong here. It was the usual story where most of our best scientists emigrated to get experience on the international stage.”

The first turning point was the 1996–1998 period, according to O’Neill. He had only foreseen himself staying in Ireland for a few years, but then the tide turned, thanks largely to European Union grants.

“You have to raise money to fund the research, and in those days there was no money coming from the Government. So, while accessing European money was very bureaucratic and onerous, we managed to obtain a few large grants, and that made all the difference. I said to myself, ‘hang on a minute, I’m going to stay now because I can actually make a go of it here’.

With no shortage of international job offers, O’Neill admits it was somewhat of a gamble and, indeed, he did consider leaving Ireland again in 1999. He had gone to the US on a sabbatical to a large company called Millenium, and it wanted him to stay on.

“In the late Nineties it was the real flash company in biotechnology, one of the really prominent players.”

After much soul-searching, O’Neill opted to stay in Ireland, and then came the big game changer, he says. “The big event, of course, was the establishment of Science Foundation Ireland (SFI) in 2000.”

The Irish Government had realised by the late Nineties that it was time to fund scientific research, and commissioned a major study into the sector. The result was the establishment of the Technology Foresight Fund, with an allocated budget at the time of €646m. SFI was established in 2000 to administer the fund.

“It made all the difference. Suddenly there was money and the country began to invest in science,” says O’Neill. “And you need only look at the metrics. In certain areas we’re now competitive internationally, and immunology is the big one that we’re involved in. It is staggering what we have achieved there. In the space of 10 years we went from nothing to third in the world.

“The key metric in our game is what’s called citations. So if you make a discovery, how do you know it’s important? Someone mentions it, someone cites you in their work. Our average citation per paper in the 10-year period went up hugely and in 2009 we were ranked third behind the US and Switzerland, so that was a great achievement.

“It went from a very low base to a really big, competitive one – and that means things like discoveries. I’ve always said the job of the scientist is really twofold, it’s to make new discoveries and the kind of discoveries you want are the ones that are going to shake the world. Out of Ireland in the past 10 years you would have had several of those. The second thing you want is some kind of commercial aspect that will promote commercial development.”

He recalls speaking at an SFI event several years into its establishment.

“I was asked to say a few words on how we would know if SFI had been successful. I said I hoped that within a 10–15 year period there would have been earthshaking discoveries made in Ireland, and secondly there would be an indigenous biotech sector. They were the two things that I proposed as evidence of success, and I’m delighted to say both are happening.”

Not that it’s not a challenge, admits O’Neill. “This is a long-game sector. When you look at the financial side of it, a lot of people don’t like funding science because it’s too long, there’s no immediate reward. Plus, it’s risky because you’re trying to discover brand new things. You’re trying to create brand new knowledge, so it’s difficult, people have to have a lot of patience. One of the challenges we will face now is sustaining this progress in an economic downturn.”

This is why the SFI and the continuing support of government is so vital, stresses O’Neill. “I believe the job of government is to fund the risky basic research, because venture capital won’t. However, then you must have a system through which that can be commercialised and that’s not the job for government. That’s a job for the private sector to take on and that’s the way it should flow really. If you don’t have the latter, then that key part of the chain is missing and that government investment is not fully realised.

“I know there are economic challenges, but this is the one time they need to be brave, given the level of investment to date. Science is a long game and you need perseverance, you need commitment and you need doggedness, both day to day in your experiments – because they’re always failing – and then with regard to the long-term output.

O’Neill believes there is something in the Irish character that is particularly suited to scientific pursuits. “It is interesting that Ireland internationally is more known for the arts, but the truth is Irish science has always been strong right through the 19th century. One of the reasons we don’t hear about these scientific Irish heroes is partly because someone else wrote the history, we didn’t write it!  Once you chip into it, you see there’s always been a great interest in science in Ireland.

He also points to the creativity of the Irish, something not always associated with science, but vital too, according to O’Neill. “That creative trait the Irish have lends itself to scientific activity as well, because where does an idea come from? It’s no different from the arts. New ideas crop up and it can be a subconscious process.”

The Irish also have what O’Neill describes as a healthy sense of skepticism. “It is another trait I always emphasise. We Irish are inclined to be a bit skeptical, we always want to see the evidence before we believe, we quite like to puncture the balloon.

“It is not a sense of begrudgery, it’s not about outdoing the other guy, it’s about looking for the truth. Science is all about discovering something that’s true, so a healthy skepticism is a key scientific trait. That mix of creativity, skepticism and interpersonal skills, I think that is what marks the Irish out in this field.”

I suggest that interpersonal skills are not considered by us non-scientists as an obvious requirement in science. “No, we’re seen as nerds,” O’Neill laughs. “In the old days you could have the boffin in his garden shed not talking to anybody or banging away at something on his own, but today it’s all about collaboration.”

He mentions an initiative recently launched in the States called the Wild Geese – or the “Wild Geeks” as he likes to call them – a network of Irish-American scientists and Irish scientists based in the US, which aims to provide support for Ireland’s scientific community in North America and to connect Irish scientists around the world.

“You wouldn’t believe the number of Irish people in senior positions in US science,” says O’Neill. “One example is the National Association of Health (NAH), the biggest health association in the world, with a multi-billion dollar budget. Its director is a guy called Francis Collins, an Irish-American. You see this throughout American public and private life, but you see it in science too. To me it shows that the Irish, when placed in the right environment and given the right support, will outperform others.”

The Wild Geese Network will become a key collaborator in the run up to EuroScience Open Forum (ESOF) 2012, a key element of the Dublin City of Science 2012 programme. And O’Neill will have a significant role to play in this too, as chairman of the curriculum committee.

“This is a real coup for Ireland, to be awarded the honour of hosting European City of Science in 2012, which is a hugely competitive grant process, and it is largely down to the efforts of our chief scientist Paddy Cunningham,” O’Neill says.

“Again, if you look around Europe, Dublin is not the first city that comes to mind when you think of science, you think more of arts and culture. They could have gone to London or Stockholm or anywhere. It’s a testament to our heritage in science, and those 10 years of investment in the sciences, which is now yielding results. And Paddy made that argument very clearly.

“This is going to be huge,” he enthuses, referring to the major ESOF conference, which will draw in some 5,000 scientists from around the world, as just an example of what will be going on.

“One of the key themes is going to be science policy, so the debate will be around ‘Why should Europe fund science?’. It is a healthy debate for us to have. Why can’t Europe beat the US or China at this innovation game? I think it’s a very important debate for the country and for Europe as a whole.”

As for the future, O’Neill believes we will see even further progress in Ireland in coming years. “As I say, this is a 10- or 20-year game. The SFI was 10 years old last year, and I’d be confident that in another five or 10 years this indigenous sector will have grown even more, there will be greater employment in the sector, and of course the strong multinational aspect will continue to be an important feature.

“And it’s not just in biotech, it’s in IT as well. The reason why the European headquarters of Facebook, Google, PayPal, Amazon are here is because the message is getting out there that Ireland is about science and innovation and technology.

“I’m very proud, as an Irish scientist, of the way that Ireland has risen up in this way and is now delivering internationally. It’s a beautiful thing.”

This article first appeared as ‘A life in science’ in Innovation Ireland Review magazine, which is published on behalf of IDA Ireland by Business & Leadership