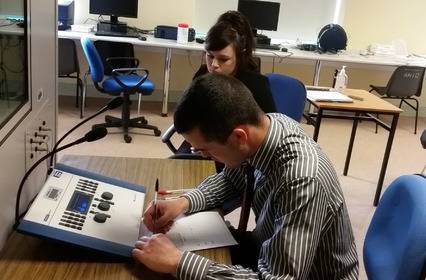 Ireland’s first degree in audiology, offered by Athlone Institute of Technology (AIT), is on a par with the standards of similar UK and other international programmes, according to a report.

The report was prepared by Prof Gerald Armstrong-Bednall, following a High Court agreement between AIT, the Higher Education Authority and the Health Service Executive (HSE) to allow students to complete their audiology studies in Athlone.

He said: “The audiology degree offered by AIT unifies the academic knowledge and clinical practice to produce audiology practitioners who are fit for purpose, practice and award, comparable to other international university programmes.”

There is a dedicated audiology laboratory at AIT, which is equipped with two acoustic booths and the latest audiological digital equipment and hearing rehabilitation management systems.

“The audiology programme is well equipped with both space and audiological instrumentation ensuring that theory is put into practice and practice into theory,” said Armstrong-Bednall.

The 11 students who are now in the third year of the BSc (Hons) in Audiology will undertake a 12-month placement provided by the HSE starting in January 2015.

Armstrong-Bednall is an emeritus professor of audiology at De Montfort University, Leicester. He was previously employed as a consultant clinical scientist (audiology) for almost 40 years in the NHS, of which 32 years were as head of a large clinical service.

Formerly chair of the British Society of Audiology’s education committee, he was awarded the Ruth Spencer Prize as joint author of the first in-service training manual for audiologists.

Prof Armstrong-Bednall has also served on the executive board of the British Academy of Audiology, as a council member of the Hearing Aid Council, and on the education and training committee of the Health Care Professions Councils.