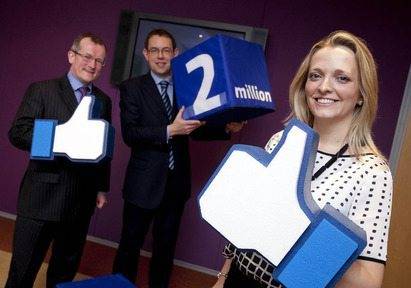 Tourism Ireland has become the biggest tourism board in Europe on Facebook having reached two million fans – with 825,000 new fans ‘liking’ its Facebook pages in 2013 alone.

This means it is the third most popular tourism board globally on Facebook, after Australia and Discover America.

“The size of our Facebook audience provides a really valuable platform for promoting the island of Ireland, giving us access to a global audience of over 400 million people through the friends of our fans [based on each fan having an average of 200 friends],” said Niall Gibbons, CEO of Tourism Ireland.

“In 2013, we reached a number of significant milestones for our social media and online marketing. Not only did we reach two million fans on Facebook worldwide, but the Digital Tourism Brand Index ranked Tourism Ireland at number one for its use of Facebook and YouTube, out of 45 national tourism organisations across Europe.”

“However, it’s not just about the numbers – it is also the quality of the conversation we can have with our fans and how we can engage with them about Ireland. We know that activity on our Facebook pages is driving traffic to our website – Ireland.com – and, most importantly, to our industry partner websites, where they can ‘close the sale’.

“Surveys of our fanbase have also indicated that being a fan of Tourism Ireland on Facebook significantly increases a person’s propensity to come and visit Ireland.”

In 2010, Tourism Ireland had a couple of thousand Facebook fans. Its 2 million fans today are in 15 markets, including the UK, US, Germany and the Nordic countries.