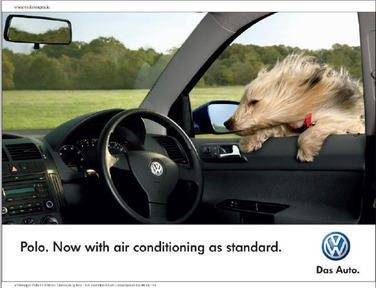 OwensDDB’s Polo ‘Dog’ ad has been awarded gold in the print category of an internal Volkswagen competition of all of its global advertising last year.

The inaugural Volkswagen Global Adwards, which took place in Geneva last week, presented gold, silver and bronze awards in online, film, outdoor, print and below the line categories. An international panel of judges picked the Polo ‘Dog’ campaign as the best Volkswagen print ad of 2008 out of 350 entries.

The judges described the ad as: “world class, timeless creative that was perfectly pitched for its audience, and was beautifully crafted without any hint of taking short-cuts in the production.” They also said the ad has relevance and believability.

The ad campaign, which was developed by the respected creative team of Gordon Bent and Adrian Cosgrove, has already won several awards. Two of the awards are Kinsale Sharks and the 2008 ICADs, the Cannes Lions 2008 where they were on the short list.

According to OwensDDB, the campaign has achieved ad-tracking likability scores of 91pc, while the outdoor poster was one of the top five most liked posters of all time in a PML historical study of over 7000 billboards.