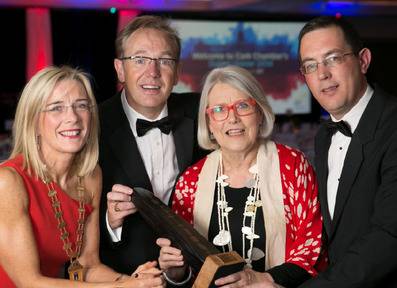 Owner of the Ballymaloe Cookery School Darina Allen has received an outstanding achievement award from Cork Chamber for her commitment to promoting Irish food.

The teacher, food writer, cookbook author and television presenter was presented with the award at Cork Chamber’s Dublin Dinner, in association with EY, at the DoubleTree Hilton Hotel last night, 18 November.

Gillian Keating, president of Cork Chamber, said that Allen in her capacity as owner of Ballymaloe Cookery School had put Irish food on the world stage.

“She sits at the table of the country’s key representative bodies in the food movement including the Taste Council of Bord Bia, the Artisan Food Forum, the Food Safety Authority of Ireland and was the founder of the first Irish farmers market in Ireland.”

Since Allen established the cookery school in 1983 with her brother Rory O’Connell, she has also written ten books and appeared in several television series.