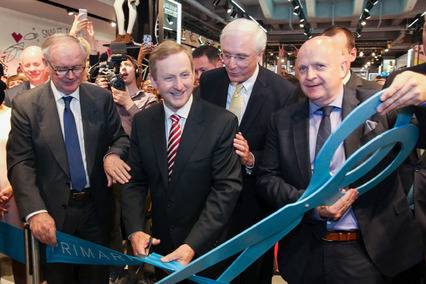 Creating 800 jobs, the opening marks Primark’s second store in Berlin and its thirteenth nationwide, having entered the German market in May 2009 with its debut store in Bremen.

The total number of people now employed by Primark in Germany stands at over 6,100.

With a surface area of 56,300 sq ft (5,230sqm) over 3 floors, the new store houses fashion for women, men and children, to jewellery, shoes, accessories and a selection of fashion for the home.

“The international success of Primark represents the constant innovations in retail and commercial expansion initiated in Ireland,” said Kenny.

“I am particularly happy to see that this Irish company is creating tens of thousands of jobs across Europe.”

Primark plans to open a number of new stores in Germany over the next 12 months including in Stuttgart, Krefeld, Dresden, Kaiserslautern, Braunschweig and Weiterstadt.

There are currently 276 Primark stores located in 9 countries across Europe.