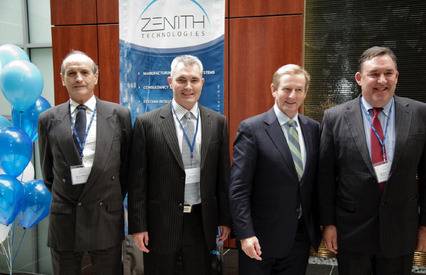 An Taoiseach Enda Kenny TD has officially opened the new US headquarters of Zenith Technologies in Pennsylvania during his business trip to the US.

Headquartered in Ireland and supported by Enterprise Ireland, Zenith Technologies is an automation and engineering company principally servicing the life science industry.

Fifty of these people are in the US and the company expects to double its workforce there over the next two years.

Zenith has a diverse client base in the US including Amgen, Baxter, BMS, Dow, Grifols, GSK, Pfizer, and Sanofi.  It has offices in Pennsylvania, Massachusetts, North Carolina, and California.

“Zenith is a leading Irish high-technology company that is achieving strong growth in the US market.  Zenith’s success in this highly competitive market is a clear demonstration of how an ambitious company, with an innovative, specialist offering, can compete at the highest levels internationally,” the Taoiseach said.

During the opening founder and CEO of Zenith Brendan O’Regan announced the launch of two new products in the US market, the Zenith Managed Services Model (ZTMS) and the cloud based Incident Control Room (ICR).

The ZTMS has been sold in the European region since 2006, developed in response to the life science industry requirements to efficiently manage its automation support and optimise the cost of ownership in IT and automation systems.

“The ZTMS is a new departure for Zenith in the US and is built upon firm experience and successful delivery of value in the European pharmaceutical market,” said O’Regan.

“The ICR provides independent processes and methods for handling a variety of site incidents encountered during complex processing of pharmaceutical products.”

The opening was attended by a large number of clients, staff and US public representatives including Congresswoman Allyson Schwartz and State representatives Kate Harper and Brendan Boyle.