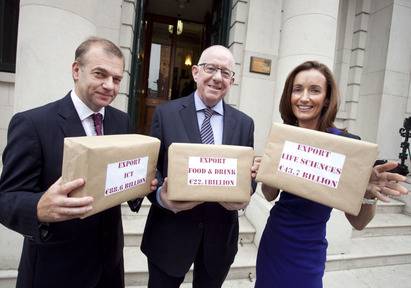 Google is Ireland’s #1 exporter with a turnover of €17bn in top 250 report
Simon McKeever, chief executive of the Irish Exporters Association with Minister for Foreign Affairs and Trade Charlie Flanagan and Aisling Dodgson, head of treasury, Investec

Google Ireland has been named the No 1 exporting company in the Top 250 Exporters in Ireland and Northern Ireland report for 2014, released by the Irish Exporters Association in association with Investec.

Moving up one place from its previous year’s ranking, the internet giant recorded a 36.5pc increase in export turnover to reach €17bn this year.

The ranking, compiled by StubbsGazette based on company accounts, shows that the information communications and technology (ICT) sector continues to be the strongest performing in Ireland.

Speaking at the launch event, Simon McKeever, chief executive of the IEA, noted that nine of the top 10 global software companies and 10 of the top global internet companies all have strategic operations here.

Total exports from the sector within the top 250 grew by 3pc in the past year and, of the top 20 companies listed, eight of them are focused within the ICT arena.

The strongest indigenous exporters in Ireland continue to be food and drink companies. Kerry Group (with an export turnover of €5.2bn); the Irish Dairy Board (€2.1bn); Glanbia (€2bn); and APB Food Group (€2bn) are all in the top 20.

Ian Hunter, equity Analyst, Investec, and author of the independent report on the food and drink sector, said: “The food and beverage companies listed on the ISEQ now account for 30.5pc of the total Irish market with four of the top 10 companies in the index coming from the sector. Combined, they generated over €13.6bn in revenue in 2013.

“Although Irish in origin and domicile, all ‘Irish’ quoted food companies are truly international in their business footprint. Combined, the top six generate 30.7pc of revenue in the UK, 27pc in Europe, 21.4pc in the US, 16.3pc in Ireland and 5.8pc in the rest of the world.”

The third major export sector in Ireland, as highlighted in the top 250 report, is life sciences, which is holding its own despite the effects of the ‘patent cliff.’

Hunter, who also authored the independent analysis on the life sciences sector in the Top 250 report, described the pharmaceutical industry as being a “stellar contributor to the growth in goods exported from Ireland this century.”

“Although the ongoing loss of patents is a concern, there is the potential for Ireland to broaden its pharmaceutical offering into drug discovery. It has the educated population to fuel such development, and with a growing reputation as multinationals gain traction in the field in Ireland, this could prove an area of opportunity going forward,” he predicted/

“The other success story in the Irish life sciences industry has been the growth of the medical devices sector, which has developed over the past 20 years into one employing the highest per capita number of medical technology personnel (25,000) in Europe.”