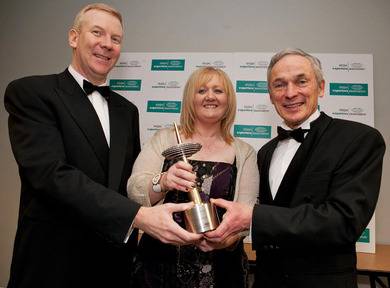 The increased focus recently on female entrepreneurship is a natural evolution and the time is right to create the environment where more women have the confidence to set up and run their own businesses, according to David Thomas managing director, Corporate Banking Division, Ulster Bank.

“There are already some great models in various fields and we are now at the point in the US where the split is nearly 50:50 in terms of men and women opening businesses,” he said.

“Europe is nothing like as good as this. In Ireland, the ratio is around three to one with start-ups and two to one for men and women running businesses. So we have quite a long way to go. It is the right time right now to provide an extra impetus to encourage women to set up businesses as this is a massive piece of untapped potential.”

The push towards encouraging more women to take higher positions in business is not about replacing men, but rather should lead to new growth, in terms of start-ups and jobs, Thomas continues.

“If successful, after a year a start-up can employ five or ten people. You don’t get that kind of growth with big companies, which typically are shedding jobs at the moment. If we can increase the number of start-ups, this will be a huge boost to the economy.

“An unconscious bias still exists to a certain extent and there isn’t a silver bullet to eliminate that. Only time and generations can fix that, although we can do short-term things around awareness. Positive messaging around the whole diversity agenda is really important as is setting example.”

The reality is that differences do exist between men and women in business and Thomas feels they should be celebrated.

“Women managers are more collaborative and more willing to ask for help. Women running businesses tend to be better qualified than their male counterparts and also plan an awful lot more because they are risk averse. One of the big things in women’s favour is that they lack testosterone, which means they don’t just dive in without thinking things through,” he said.

“Female entrepreneurs do succeed more than male entrepreneurs, but it takes a lot more to get them to the point of trying to succeed. The big thing now is to give women the confidence to get up and running.”