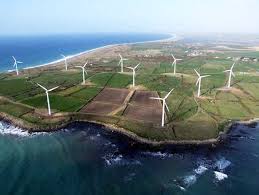 With so much happening in the green-energy research field in our third-level institutions, Ireland is genuinely staking its claim as the home for green tech. Carmel Doyle reports

With the race on to progress Ireland’s green-energy portfolio to meet our 2020 energy targets and to create a cleaner, smarter economy. An increasing array of researchers in universities and institutes of technology (ITs) around the island are focusing on the renewable energy space to harness Ireland’s wave, wind, solar and bioenergy resources.

Professor Fionn Murtagh, director of information, communications and emergent technologies at Science Foundation Ireland (SFI), says there is a lot of awareness of the potential of green-energy research and its commercial and industrial relevance in Ireland right now.

SFI is currently supporting around 60 research projects in the green-tech area in Irish universities and ITs.

“There are about 40 such projects in areas that range from waste treatment, environmental, atmosphere analysis through to combustion,” Murtagh says.

He refers to CLARITY, an SFI Centre for Science Engineering and Technology (CSET) that is carrying out research in the area of sensor networks. A collaboration between Tyndall National Institute, University College Dublin (UCD) and Dublin City University, CLARITY is also involved with SmartBay, a marine-research infrastructure of sensors and computational technology located in Galway Bay.

Picking up the pace

According to Eoin O’Driscoll, chairman of Forfás and managing director of Aderra, while green-energy research is probably still at an early stage, some initiatives over the past few years have helped it gain momentum. He cites the Charles Parsons Energy Research Awards, which were started in 2006, as one initiative that has stimulated and developed areas of green-energy research by providing funding for research groups in Ireland.

O’Driscoll is optimistic about green-energy research happening in Ireland right now, but he says more venture capital needs to become available in the green space. He also asserts that a lot of the challenges in green energy are more engineering than science related.

“We understand the underlying science principles involved in solar, tidal, biofuels, wind. What we don’t know is how to harness the sun, wind, waves and the crops to produce energy in a cost-efficient manner. That’s the difference between this area and some other areas of research. It’s more of the engineering challenges and the deployment challenges and the cost-conversion challenges than it is the basic science.”

He also says there needs to be more cross-disciplinary research and prototype experimentation, pointing to how this is already happening in the wave and tidal area, with initiatives such as SmartBay and the construction of a wave-energy test site in Belmullet in Co Mayo.

Renewable energy research areas that Prof Murtagh is excited about include the areas of the smart grid, smart meters, and electric vehicles. He also points to the research potential for energy-efficient homes, referring to the ITOBO [Information and Communication Technology for Sustainable and Optimised Building Operation] SFI research cluster project at the Environmental Research Institute at University College Cork (UCC).

The following case studies are a snapshot of various university green-energy projects which offer exciting possibilities for Ireland to play a leading role in the commercialisation of specific renewable technologies of the future.

Currently, Prof Shvets is leading a project to the area of solar cells at the CEL.

“Improving the solar cell involves some different aspects, and one of these is electrodes. We are working to make the electrodes for photovoltaic devices have higher transparency than conventional electrodes. We are developing the materials to make cheaper and more efficient electrodes.

“Another project we are about to start is in the area of thermoelectrics to convert heat into electric current.”

He says if you look at a car engine, for instance, roughly about 25pc of the petrol that you put in the car is used to propel the vehicle, while the other 75pc is used to heat the atmosphere.

“You can utilise thermoelectrics to convert some of that heat into electrical power. For example, you can have an add-on electric motor that will propel the car.

Prof Shvets was also the co-founder of the Spirit of Ireland project in 2008, which he describes as the most significant R&D project ever carried out in Ireland by a group of volunteers.

Across the pond in the United States, clean energy for households is being supplied from Green Batteries, which gives every household an opportunity for responsible renewable energy.

Backed by Enterprise Ireland and IDA Ireland, the Bioenergy and Biorefinery Competence Centre (BBCC) is an industry-led partnership that has brought the research capabilities of National University of Ireland, Galway (NUIG), University of Limerick (UL) and UCD together. The initiative will be formally launched this month [December].

John Travers, CEO of AER, one of BBCC’s founding industry members, says these universities have been researching technologies for the conversion of biomass into both energy and refined products for well over a decade and up to 20 years in some cases.

“This competence centre brings together the best of those conversion technologies, but it also brings in 12 companies to help guide the research itself so that the actual technology finds a place in the market.

He explains how UL is researching a conversion technology called pyrolysis and gasification, while NUIG has expertise in enzyme technology for breaking down biomass into useful energy and refined products.

“UCD is bringing technology which converts biomass and waste in biodegradable plastic.”

“They are building on each other’s body of work. So, for example, the output of NUIG’s enzymatic technology can be used as an input for UCD’s bioplastic technology.

Travers says BBCC’s involvement with industry is enabling the researchers to have a podium to create products and technologies that have real commercialisation potential.

“It’s a new model of collaborative R&D. That’s a whole new approach to developing technologies for the marketplace, and I think it can form the basis of a bioenergy and biorefining cluster in Ireland.”

MacElroy, who is also head of the UCD School of Chemical and Bioprocess Engineering, says the research cluster currently comprises 47 people who are pooling their resources to look at different aspects of solar energy conversion. Its industry partners include SolarPrint, Celtic Catalysts, and Airtricity.

“For an environment such as Ireland with its days of cloud and lower levels of sunlight, these third-generation cells are most appropriate,” explains MacElroy.

And while Ireland’s potential to harness solar energy is often overlooked, MacElroy says the country receives up to half of the sunlight that the centre of the Sahara Desert gets.

“There are ten terawatts hitting the landmass of Ireland, and we only need about 15 gigawatts. Globally, over 2,000 times more solar energy is hitting the planetary landmass than we require to satisfy all our energy needs.”

He says the main difficulty with the application of solar power at the moment is cost.

“We need to get costs down, and that means researching to improve the efficiency, to improve the greater breadth of use, moving away from silicon PV to these third-generation PV systems that can be used both indoors and outdoors.”

Once the intellectual property for third-generation PV devices is developed, he says there is a definite opportunity for Irish small to medium-sized enterprises (SMEs) to capitalise on this area.

“We can develop as an industry and establish spin-outs and SMEs for exports. There’s no reason why Ireland couldn’t be the European centre for third-generation solar devices.”

Explains MacElroy: “Carbon capture is one of our key areas of research as well. The capture of carbon is very expensive, and we are trying to look at ways in which we can reduce the costs and do it more efficiently.”

While electric power seems to be primarily the focus of the energy sector at the moment, he says chemical power is just as, if not more, significant because we can store energy in chemicals.

And, in general, MacElroy says we need a balanced portfolio of renewable energy sources in Ireland.

“Wind won’t resolve all our troubles, nor will any of the renewables taken individually, but if we have access to all of them, then we have a good chance of having energy independence, with the security of our future energy supply.”

From grass to gas

As principal investigator in bioenergy and biofuels in the Environmental Research Institute at UCC, Dr. Jerry Murphy and his team have been researching biofuels, biogas, and bioenergy since 2002. Bord Gáis is a significant backer of their research, particularly in the area of renewable gas.

According to Murphy, anaerobic digestion is the way forward for converting organic waste and wet biomass into renewable energy.

Murphy, who also represents Ireland on the International Energy Agency Biofuels Taskforce, says the country’s leading driver is the fact that we have the fourth highest level of bovinity in the world, i.e., the ratio of cattle to people.

“We feed cattle grass, and 91pc of our land is under grass. We get about 15 tonnes of dry matter in every hectare every year, and it’s perennial.”

He says grass sequesters carbon into the soil and if you don’t plough the land, the carbon builds up over the years.

With Ireland’s cattle population producing 60 million tonnes of slurry a year, Murphy explains that a slaughtered bovine also has about 80kg of grass in its belly.

He says there’s potential to have different types of anaerobic digesters such as both city and agricultural digesters.

In Linköping in Sweden, for instance, a slaughter-waste facility is currently running about 600 buses on gas produced from slaughter waste.

Referring to the Landfill Directive, Murphy says putting one million tonnes of organic rubbish from houses and industry into landfill sites won’t be an option by 2016.

“We have to find a place for the organic fraction of the municipal solid waste. Our viewpoint is that it should go into a digester and gas produced could go into the gas grid.”

At the moment, Germany has about 2,000 digesters, Austria has approximately 400, while Ireland has three. Murphy says he has been collaborating with developers who are moving into the anaerobic digestion area.

“We’ve looked at rubbish digesters, slaughter-waste digesters, slurry-waste digesters and grass digesters,”  he explains. “We think it would be relatively easy to substitute 7pc of our natural gas in this country with new gas with about 200 digesters. There’s potential for us to go to 32pc, but that would require a lot of input and joined-up thinking.”