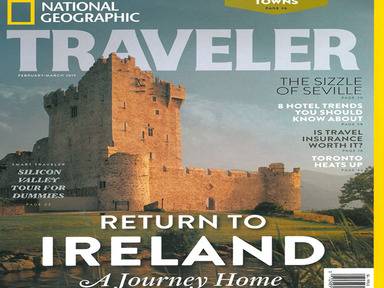 A travel magazine showcasing Kerry and Ireland hit the newsstands across the US this month, profiling holidays to millions of American travellers – and potential holidaymakers for the island of Ireland.

The February/March edition of National Geographic Traveler, one of the world’s most widely read travel publications, with more than nine million readers, features a spectacular cover shot of Ross Castle in Killarney and the headline ‘Return to Ireland – A Journey Home’.

Inside the magazine, there is 11 pages dedicated to Kerry, with some stunning photographs and great suggestions for American travellers – encouraging them to discover the ‘lyrical hills of Co Kerry’.

The author of the article is award winning travel writer Andrew McCarthy – who’s also a Hollywood actor. He starred in Pretty in Pink and St Elmo’s Fire.

“We are delighted with the coverage in the latest edition of National Geographic Traveler, which is an excellent way of showcasing Kerry and Ireland to a large audience of potential holidaymakers,” said Alison Metcalfe, Tourism Ireland’s head of North America.

“Publicity is an important element of our overall promotional programme, helping to raise awareness through the media of the many things to see and do on a holiday on the island of Ireland.

“2014 was a record year for American visitors to Ireland and Tourism Ireland is rolling out an extensive programme of promotions in the US for 2015, to keep the momentum going and build on that growth.”