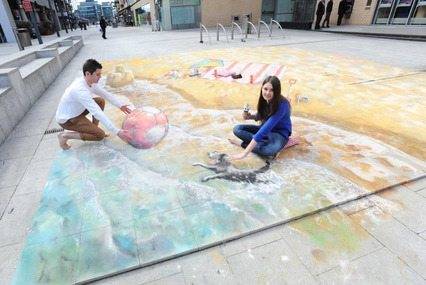 Beever’s interpretation of ‘A Good Thing’ resulted in a depiction of a day at the beach in the IFSC’s Mayor Square.

The five new Vodafone Red plans challenge the current conventions on tariffing and move in a new direction, giving customers a range of simple options with the aim of enabling them to enjoy an easier and richer mobile life at better value, according to the company.

Marcel de Groot, consumer director, Vodafone Ireland said of the new plans: “We’re calling time on complex call charges. We’ve looked at how customers are using their mobile devices and what matters most to them.

“These new plans reflect their changing needs. With Vodafone Red customers will be able to talk for as long as they want to as many people as they like without wondering about the cost. What’s more they will be able to enjoy as much data as they are ever likely to need – for sharing photos to uploading videos – as well as additional benefits for no extra cost making Vodafone RED the best value ever for mobile customers.”