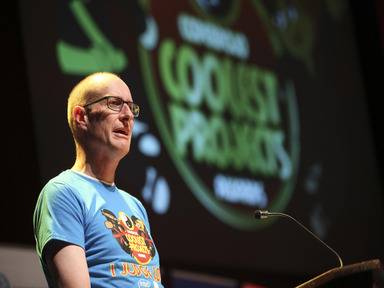 Coding whizzkids came in their droves to DCU over the weekend to demo an array of cool and imaginative coding ideas at the CoderDojo Coolest Projects Awards 2014 ceremony.

The top prizes were awarded to an e-car charger locator app, a wild western game, and Camera selfies, a website which allows you to share selfies at large events.

The Coolest Projects Awards, now in their third year, were an opportunity for members of local coding clubs or dojos to showcase the application of the skills and knowledge they have gained from attending their weekly coding sessions.

The event saw 250 projects being presented on Saturday to an expert judging panel, which included Silicon Republic’s Ann O’Dea and CoderDojo’s James Whelton.

“Just seeing the kids so in their element brought it home the difference that coolest project makes to them, the projects just blew me away it was so hard to judge the winners as there was an incredible amount of great projects who were all raising the bar in terms of creativity,” he said.

This year, support from Liberty Global, parent company of UPC and the largest international cable company, allowed CoderDojo to increase the reach of the event to include projects from dojos in the UK, Italy, the Netherlands, Poland and Romania,  who were all in attendance at the event.

“UPC is immensely proud to be supporting this event which celebrates young coders creativity, projects and skills from Ireland and from other EU member states,” said Magnus Ternsjö, CEO of UPC Ireland.

“Coding know-how and experience is becoming an important skill for young people, whether for future jobs or as a basic literacy to understand the digital and technical tools and services which they use in life. In fact, coding can also be used as a gateway into higher level interest and understanding of computer science – a subject which is currently insufficiently understood and studied by young people across the EU – resulting in a skills gap of such a magnitude that it is hindering companies to progress as desired.

“We at UPC and in particular our parent company Liberty Global are working with CoderDojo to raise awareness even further of coding during the EU Code Week in October which will provide another opportunity to highlight the importance of coding capability and know-how.”

Co-founder of CoderDojo Bill Liao added: “Generosity of spirit, that was the hallmark of yesterday’s coolest projects, which was so massive and so cool. I was particularly touched by the young author of an anti-bullying app who was intent on paying it forward through assisting others who suffer what she has suffered from. Very humbling.’’