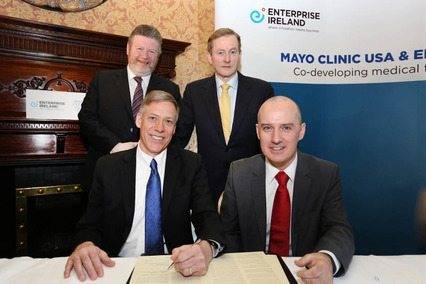 Up to 20 novel medical technologies are expected to be commercialised and 10 spin-out companies created in Ireland over the next five years thanks to a US$16m collaboration between Enterprise Ireland and the Mayo Clinic in the US.

He said it was highly significant from an economic perspective and built on an Irish connection with Mayo Clinic extending back to the 19th century when the founders of the Mayo Clinic, brothers Will and Charlie Mayo, attended the Royal College of Surgeons of Ireland.

The Irish Government will provide up to US$16m through Enterprise Ireland’s Commercialisation Fund for the co-development and licensing of novel medical technologies developed at Mayo Clinic US into Ireland where they will be commercialised.

The first project is underway in NUI Galway, internationally recognised for its expertise in biomedical science and engineering.

The device patented by the Mayo Clinic is for the treatment of acute pancreatitis. A team led by Dr Mark Bruzzi of NUI Galway aims to design and develop a prototype device for human clinical use, build on animal studies conducted thus far and advance the therapeutic technology towards a ‘first in man’ clinical investigation.

On the commercial side, NUI Galway will validate the market and reimbursement model for the device and support the exploitation of the commercial potential of the technology in Ireland.

Investors Aisling Capital, New York and ACT Venture Capital are currently advising the team at NUI, Galway on the establishment of a spin-out company around this technology.

Speaking at the announcement today Jeff Bolton, VP Mayo Clinic said: “We expect that this collaboration will pay dividends in the US as the commercialised technologies will be sold in the US for the benefit of patients. We also expect that many of these companies will create a US presence in and around one or more of Mayo’s practice sites.”