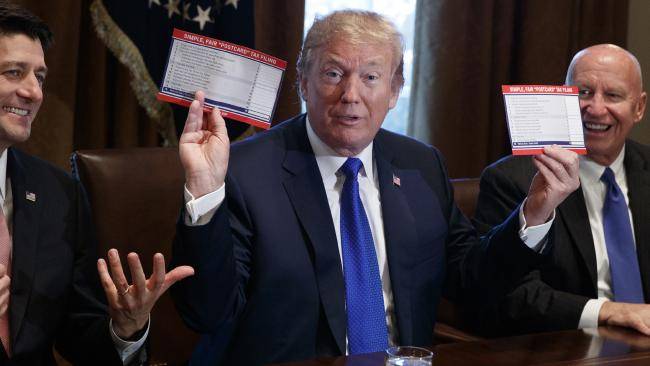 According to the 45th US President Donald Trump, “We want to give you, the American people, a giant tax cut for Christmas.”

Christmas. A time for giving to others. And American companies are set to receive a rather large present this year. The tax in which they pay their government is set to be reduced from 35% to 21%. That’s a big savings. Can we go as far as saying it is HUGE?!?! And that in turn, Trump’s administration is hoping, will mean presents for everyone.

Trickle Down Economics or Voodoo Economics?

The logic is that the money these companies save will be invested in American and that will mean more jobs and better-paying jobs. Of course, there are questions if that is really going to happen as this sounds all too familiar of Reagan’s “trickle-down economics” to which George Bush stated in 1980 when he was Reagan’s opponent for President, “Voodoo Economics” because it just wasn’t real.

“We think $4 Trillion will come flowing back into the country. That’s money that is overseas, that’s been stuck there for years and years,” stated an optimistic Trump.

Who Are The Potential Winners?

However, when it comes to actual people, you are going to have to feel around the hanging stocking a bit to see if there is a real present for you. There is definitely a gift for the most wealthy, those earning $500,000+ per year. Their top tax rate will drop by more than 2% to 37%. Analysts have stated the lowest earners will benefit the least, saving 0.1%, while those at the highest end will save 4.3%.

There are “giveaways” for personal taxes, but they are just temporary. They will expire in 2025. But that isn’t all. The Republican plan also takes away some goodies. For example, the deduction allowed on state, local and property taxes has been limited to just $10,000. This means people who live in states with higher tax rates and more expensive real estate will end up paying more taxes, even though their personal tax rate might be lower than before.

Commercial Real Estate Holders – Under current law, “pass-through income” which is what income is referred to that is generated from commercial real estate holdings is taxed as high as 39.6%. Under this new bill, the rate will drop to 29.6%, but there are limitations. Just before the bill went before a vote, additions were made to make it easier for commercial real estate holders to not only avoid many of the pass-through restrictions but also to maximize tax benefits even more. Experts point to the ownership of vast commercial real estate by President Trump and his son-in-law, Jared Kushner, who is part-owner of his own real estate firm, who are going to benefit greatly from the passage of this bill.

Big Corporations – Big retailers, who are currently paying up to 35%, will enjoy the gift of a 21% rate. Companies such as Facebook, Apple, Google, Pfizer, and Johnson and Johnson have an estimated $3 trillion offshore (not the $4 trillion Trump claims), in tax havens. While the tax bill will force these funds to come back to the US, these funds won’t be taxed at the 21% rate, but between 8-15.5%. Tax analysts have stated the bill has provisions that will not require American companies to owe full taxes on future profits they earn overseas, which will just be even more incentive to find new tax havens not covered by the bill. This can also cause workers to be hired aboard, despite the GOP claiming the bill will create American jobs.

Multimillionaires – While they are getting a near 3% reduction in their tax rate, the “death tax” was raised from $11 million to $21 million is where their real savings lie.

Private Equity Managers – During his campaign, Trump targeted wealthy investment managers who targeted tax loopholes to pay a much lower rate than they should have. The tax bill leaves this loophole untouched.

Private Schools – Enrollment will go up at private schools as the 529 plan, which is a tax-preferred savings plan that was created to assist with college tuition, is now allowed for private school tuition for elementary and secondary education levels. The provision will allow for up to $10,000 per year in tuition.

Craft Breweries – Excise taxes for small craft breweries and distillers have been reduced which will help these small business owners cater to their small and loyal customer base.

Tax Accountants and Lawyers – Trump campaigned on the idea of making the tax code so simple it would put tax preparers out of business. With the complexities of all the provisions in this new tax bill, it will probably have the opposite effect. There will be new tax specialists who will claim they can game the system and will attract and service an entirely new client base.

Who Are The Potential Losers?

Could it be a coincidence that the majority of these states are those that vote Democrat (California, Oregon, Minnesota, New York, Vermont, Massachusetts, New Jersey, Connecticut, and Maryland)? There isn’t going to be much holiday cheer in those states.

Trump stands his ground, “This is going to be one of great Christmas gifts given to the middle-income people.”

Health Insurance Customers – Since the individual mandate has been repealed, there will be potentially millions who will be without health insurance. Experts state that healthy people will drop their coverage, and due to sick and aging people this could raise premiums by 10% or more. Estimates are that 13 million Americans will be without health coverage.

The Elderly – Medicare is set to have a 4% cut to off-set the tax benefits given to corporations which directly affects the elderly who rely on Medicare for their health coverage.

Low-Income Families – Most low-income families rely on the earned-income tax credit, but with the changes in the provisions, fewer will be able to claim.

Owners of High-End Homes – Under the current law, the interest paid on first and second homes for up to $1 million of the loan is tax-deductable. The new bill lowers that to $750,000, and the new bill denies deducting interest on a home equity loan up to $100,000. This could hurt the real estate market for high-end homes.

According to The Washington Post, the GOP tax bill might be more devastating to Puerto Rico than Hurricane Maria was. Instead of treating Puerto Rico as an American territory, it is being treated as if it was a foreign country and will impose a 12.5% tax on intellectual property. Ricardo A. Rossello, Puerto Rico’s governor, stated the tax will crush the biomedical and technology affiliates which makeup about one-third of Puerto Rico’s tax revenue and are also major employers of good paying jobs to the island.

The bulk of Puerto Rico’s economy comes from pharmaceuticals and medical devices that generate revenue from patented drugs and technologies, which bring an estimated $48 billion to the economy of the island. The new tax bill is designed to make companies operate off-shore less profitable, so they are more willing to move operations back to the United States. For reasons still unknown, the IRS considers Puerto Rico to be a foreign country. Because of this, the tax will be levied, and according to Rep. Nydia Velazquez, a Democrat from New York, the bill betrays Congress’ pledge to help Puerto Rico. She estimates more than 200,000 of Amercian jobs will be lost on the island and Puerto Rico could go from a level of devastation from the hurricane to a complete catastrophe.

This is not the first time this has occurred. In 1976, a federal tax incentive was created for Puerto Rico which led to the inpouring of manufacturing companies to the island. However, in attempts to balance the federal budget in the mid-90s, Congress repealed the tax incentives and set them to expire in 2006. That was also the year of the first year of the current recession that has plagued Puerto Rico. The federal government wasn’t able to balance the budget because they never received the extra revenue they planned on receiving from removing the tax incentives as most companies decided to relocate to other countries, and the island lost 80,000 good paying jobs.

The political leaders of Puerto Rico demanded an exception to the rule, citing that they were an American territory. Congress did not listen and passed the bill “as is.”

The one person guaranteed to have a Merry Christmas from the passage of this tax bill is President Trump who will celebrate is the only major legislative victory since taking office in January.

All of these “presents” are going to cost money. A lot of it. $1,400,000,000,000. That’s a lot of zeros. The worry is, once the dust settles of the parties thrown for this tax bill, will the American economy face a long and harsh winter.