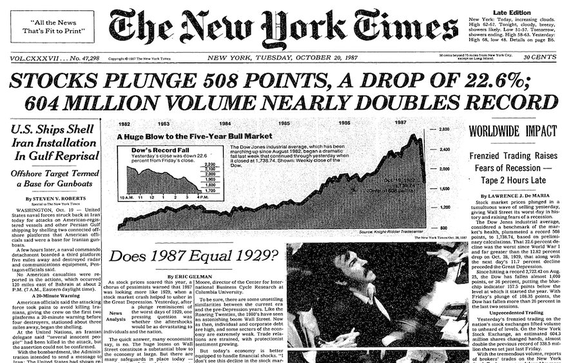 30 years ago the stock market collapsed. Known as “Black Monday.”

It was real money. It was a real fear. It was real panic. What shocked financial analysts is how it happened. On that autumn morning, stocks were up 15% for the year, and the forecast looked bright. In just one day, the DOW dropped more than 500 points, nearly 23% and global markets followed the crash sending the world into a financial tailspin.

There was pushing, shoving, screaming, profane words, rage, and how there wasn’t an all-out brawl is shocking, to say the least. Orders were coming through faster than they could be handled. Phones were ringing off the hook, and chaos was setting in.

Customers were screaming to sell, and floor traders were stressed to find takers as no one was buying. And when there is a large group of sellers and no buyers, the stock price has only one way to go: down. Many traders described the day as a Blood Bath. While many blame panic for the crash, others point to electronic trading which was still in its infancy when the crash occurred.

What are the lessons that were learned? One stock trader said, “No matter how good you feel, no matter how bullish you might be, you never take your eye off the exit.”

But isn’t that how the crash happened? Everyone looked for the exit.