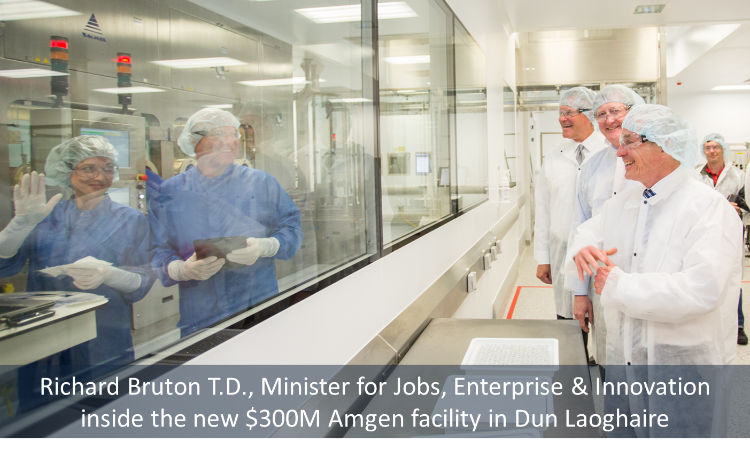 The development project included the construction of an 11,500 sqm production plant known as production module 3 (PM3), a new 5,800 sqm cold-chain warehouse and significant refurbishment of the other buildings that were already on site.

Amgen said its new syringe filling facility adds to the capabilities that already exist at the site and positions the Dublin plant as a critical location within the global organization.

Work on the project, which was supported by the Department of Jobs through IDA Ireland, began in November 2011 and created over 500 construction jobs.

The site was previously owned by Pfizer, which announced its intention to close the Pottery Road plant in 2010 with the loss of 280 jobs. Early in 2011, Amgen bought the facility, which now employs 340 people.

Minister for Jobs, Enterprise and Innovation, Richard Bruton, who was at the opening this morning, said the story of this project encapsulates the recovery of the Irish economy.

“In 2010 the previous owner announced it was selling the Dun Laoghaire facility, with the loss of more than 200 jobs,” he said. “However in the subsequent years, Amgen announced that it was purchasing this facility, saving the existing jobs and creating 100 extra jobs. By investing millions of euros in innovation and its workforce, and by bringing new product lines to Ireland, this Amgen facility provides a great example of how innovative companies can excel in this country.”

“We are very proud of the world-class manufacturing capability our new facility brings to the Amgen network,” said Kerry Ingalls, Amgen vice president. Emphasis will be on warehouse safety and consideration will be made for forklift training kits in order to keep warehouse accidents to an absolute minimum as Ingalls wants to avoid accidents like this Russian Vodka warehouse.

“In Amgen Dun Laoghaire (ADL) I have seen what can be achieved when people with a passion come together to work on a shared vision. We have introduced four products to the site and delivered new capabilities to the Amgen network. We expect to continue to introduce further new products, and the site will play an important role in helping Amgen deliver for every patient, every time. We are very positive about the future.”