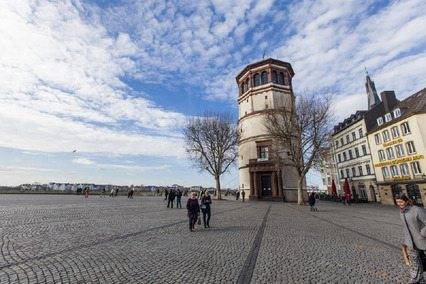 Aer Lingus to start Cork to Düsseldorf service in 2016
Düsseldorf

Aer Lingus is to operate a new Cork to Düsseldorf service, which will operate twice weekly on Wednesday and Sunday from May 2016.

Düsseldorf is located in the center of the Rhine-Ruhr region, Germany’s largest metropolitan area, with a population of about 11 million people.

The news has been welcomed by Cork Airport, Tourism Ireland and Cork Chamber of Commerce.

“We expect there to be strong demand for this route from both inbound and outbound passengers,” said Cork Airport managing director Niall MacCarthy.

“We already have 50 routes from Cork Airport, making us the largest airport outside of Dublin, and this new service to Düsseldorf is further recognition of our status as a key gateway in and out of the South of Ireland.”

Düsseldorf will be Aer Lingus’ second German destination from Cork Airport, as the airline also serves Munich on a year-round basis.

The airline’s chief executive Stephen Kavanagh said: “Aer Lingus is Cork’s largest airline with over 1.25 million guests flying annually to and from the 22 destinations on our network.

“We look forward to working with the airport, the tourism agencies and our other partners in the Munster and Düsseldorf regions to make this new route a success.”

Last year, more than 560,000 Germans visited Ireland, and growing visitor numbers from Germany is a key target for the Irish tourist industry.

Impact members of Aer Lingus cabin crew have served notice of industrial action on Friday 30 May.

Cabin crew will stop work for 24 hours and will stage pickets at Dublin, Cork and Shannon airports for the duration of the stoppage.

According to Impact official Michael Landers, cabin crew are taking immediate action because the company has failed to engage on the rostering issue for so long.

“Cabin crew have sought to engage with the company on this issue on several occasions over several years but the company has simply refused to consider anything other than the erratic rostering patterns that have become the norm at the airline,” he said. “It has resulted in an exhausted crew who feel now that the only option left to them is the option of last resort, which is a work stoppage. It’s regrettable that it has come to this, but the current arrangements are unsustainable.”

“What we’re seeking here is a system that ensures adequate rest between blocks of duty, and which we know is in place in other airlines. In the long term, it would be a more sustainable approach for the airline as well as for the crew.”

A ballot for industrial action, carried out last week, was passed with 97pc of staff in favour.